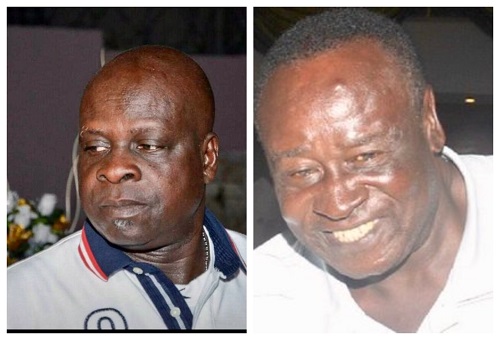 Perhaps it is an irony of history that in the midst of the so-called COVID-19 crippling all sporting activities worldwide, notably the nation’s pastime, football, Ghana should lose two legendary goal scorers Opoku Afriyie of Asante Kotoko fame and Tano Bofoakwa’s Kwasi Owusu.

Interestingly, both players were  different both in size and temperament but they found a common denominator in the art of brilliant goal scoring both at club and national level. And both captained the Black Stars.

Nimble footed Opoku Afriyie atoned for his pint size with amazing ball control. He could score speedily with either foot.

Kwasi Owusu’s huge frame was a defenders nightmare . He formed an amazing partnership with another wizard striker, Dan Owusu and the two of them (not siblings) shared more than 90% of Bofoakwa Tano’s goal haul for three consecutive league seasons in the 70s.

Surprisingly, despite his huge frame, Kwasi was not robust and even allowed himself on occasions, to be bullied in the box. Some say he was gentle to a fault at times.

Historians will recall an incident at Accra Stadium in 1975 during the novelty Ghana-Nigeria Friendship Games when Nigeria goal keeper Okalla slapped him in a minor struggle for the ball.

He had a fierce temper and never allowed himself to be bullied by anybody on and off the pitch.

It was a rift with Kotoko management that resulted in his compulsory retirement from the team in 1983. He played briefly for close rivals Hearts of Oak, and soon returned to his natural habitat, Kotoko. He was for a long time Kotoko team manager and later on Black Stars Welfare Officer.

Opoku Afriyie’s goal scoring prowess was detected in the early 70s when he was a Colts player for Kumasi Hearts Babies. He was already a household name at Manhyia Park and when he joined Kotoko in 1974 he quickly made his presence felt with some fantastic goals.

He matured so quickly that in his second season with Kotoko he nearly won the goal king title. His tally of 27 fell short by one to Dan Owosu’s haul of 28. Dan of Bofoakwa Tano fame retained the goal king crown but Opoku  Afriyie will be remembered for his two brilliant hat-tricks in the season.

He scored thrice against Ghanacan whom Kotoko beat 7-1 and got all three goals against B.A. United. When Kotoko thrashed 7-0 in Kumasi, Opoku Afriyie got four of the seven goals.

His record in the Africa clubs series was also superb. He got a hat-trick in the 1982 continental clash against Kampala City Council of Uganda in Kumasi that Kotoko won 6-0.

“Be consistent and get your national team places”- C.K. Akonnor to home-grown players

"Be consistent and get your national team places"- C.K. Akonnor to home-grown players