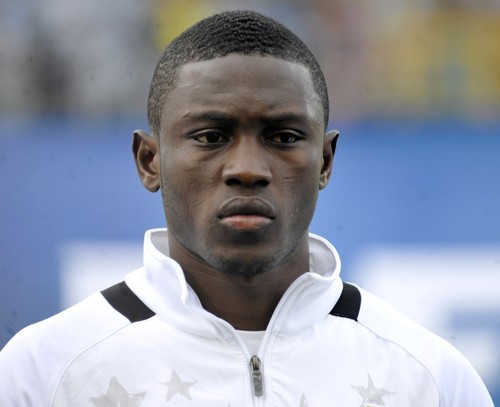 Ghana's forward Abdul Majeed Waris listens on October 15, 2013 to his national anthem prior to the kick off of the Fifa World Cup 2014 qualifying football match Ghana vs Egypt at Baba Yara stadium in Kumasi. AFP PHOTO/STR (Photo credit should read STR/AFP/Getty Images)

Ghana forward, Majeed Waris, has claimed that selection to the senior national team, the Black Stars, is influenced by internal politics in the team, rather than based on merit.

Waris made the remarks in an instagram live chat with journalist Saddick Adams where he also responded to claims by teammate, Mubarak Wakaso, that partisan politics was destroying the Black Stars.

The Strasbourg forward has played 34 times for the national team but has not featured for the team since September 2018.

The 28 year old believes biased player selection by national team handlers the cause of Ghana’s woes, rather than NDC-NPP politics.

“I saw Wakaso making a comment that politics is affecting the Black Stars. I feel that it is not the political thing that is affecting the performance of the players on the field because politics does not play football”, he told Saddick Adams Obama on YAC Media on Instagram Live.

“I think with the national team, the politics affects the selection of players.

“With me they call you from Europe when you’re performing and always drop you like a scapegoat for players who do not even play half a season and I’m not going to talk about myself alone.

“I feel the political aspect of player selection is something that is affecting the Black Stars.

“The selection is not based on your performance, it’s only based on politics in the team and I think it is something that affects us at tournaments because that’s the biggest stage that everyone wants to be part and that’s also when the politics get in a lot” Waris concluded.

“We are pleased with Manhyia intervention in Esperance saga”- Asante Kotoko

"We are pleased with Manhyia intervention in Esperance saga"- Asante Kotoko