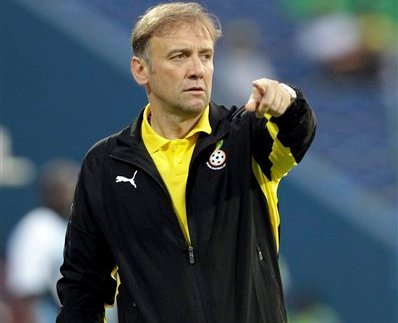 Former Black Stars head coach, Goran Stevanovic, says he will not hesitate to say ‘yes’ to a return to coach Ghana’s national team should he be called.

The Serbian trainer was fired with 10 months left on his two year contract after he lost to Zambia in the semi finals of AFCON 2012.

Eight years on, the former Partizan Belgrade player said he has unfinished business in Ghana.

Asked if he would love to return, Plavi said, “I won’t think for one minute.”

“I feel like I did not finish my job. But first, somebody must call me. I know that Ghanaians have not forgotten me because I took charge of some of Ghana’s best games,” he told Ashh FM in Kumasi.

“I remember after the friendly with England [which ended 1-1], the England coach, Fabio Capello told me it’s one of the best games he has ever played.

“After the AFCON in Equatorial Guinea and Gabon, Andre Ayew told me I’m one of the best coaches he has ever worked with.

“I still speak to some of the players like Essien, Muntari, Painstil, so hopefully one day I can return,” he said.

Stevanovic was the third and final piece of a Serbian experiment with the Black Stars that largely yielded good results.

Ratomir Dujkovic started off the Serbian reign in 2005 and qualified Ghana to its maiden world cup appearance in 2006.

He was then replaced by another Serbian, Milovan Rajevac, who took Ghana to a second world cup campaign in 2010 and reached the quarter finals. He also led Ghana to the AFCON 2010 final, losing to Egypt.

Stevanovic was hired to replace Rajevac, promising to win Ghana an elusive AFCON title for the first time since 1982 but a semi final defeat to eventual winners Zambia in AFCON 2012, proved his undoing and he was given the sack with his assistant, Kwesi Appiah picked as his replacement.

The Black Stars are currently coached by its former captain, CK Akonnor.