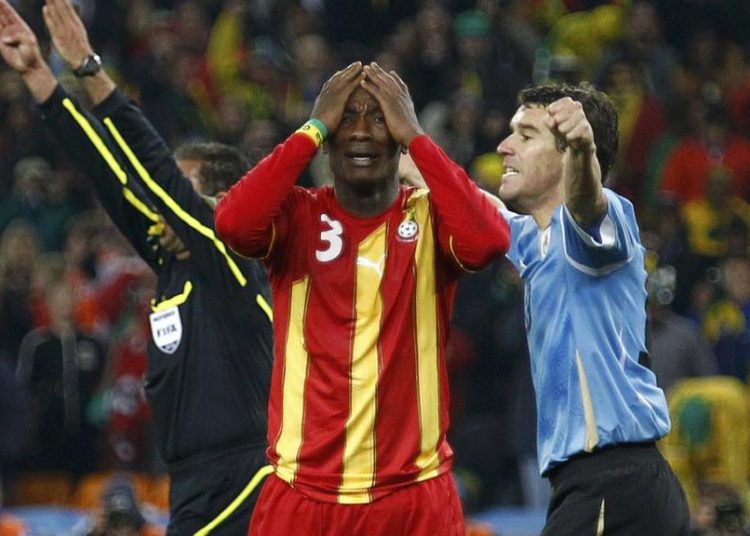 Uruguayan striker, Luis Suarez, has revealed that one of his teammates “passed out” while celebrating Asamoah Gyan’s last minute missed penalty in the quarter finals of the 2010 world cup between Ghana and Uruguay.

In what has gone down in history as one of the most dramatic games in world cup history, Gyan missed a last minute penalty that would have sent Ghana to the semi finals of the world cup for the first time, after Luis Suarez handled on the line to prevent a certain goal.

The game eventually ended 1-1 after extra time and Ghana went on to lose the game in the penalty shoot outs.

And Suarez, who was sent off for the penalty incident, saw desolation turned to ecstasy in a matter of minutes when Gyan struck the crossbar with his efforts, celebrating wildly on the touchline.

While the Barcelona striker was subsequently vilified and accused of being a cheat, the 33-year-old believes he cannot be blamed for Gyan’s crucial penalty miss, as he was rightly punished with a red card for his actions.

“Yes, the truth is, it was a bit of everything — of being depressed, of being sad, of being sent off. Because we were going to lose, but if they weren’t scoring that goal we weren’t going to lose, and … well, you get up within 30 seconds when he takes the penalty kick, the satisfaction of well, I took a risk in a situation of which I have been blamed for anti-fair play. However, the Ghana player missing the penalty is not my fault,” Suarez told the Players’ Tribune.

He added: “I didn’t kick anyone or anything like that, that’s why I think that I celebrated like that, for having taken a risk for something that was worth it.

“And I remember that I celebrated it more than a goal. A teammate on the bench passed out on that play, hahaha.”