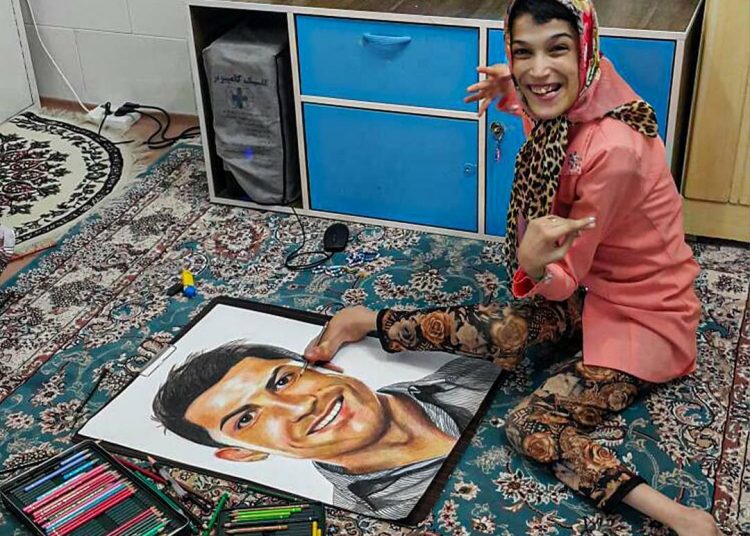 Iranian female artist, Fateme Hamami, who has 85 per cent paralysis of her body, has painted a magnificent portrait of superstar footballer Cristiano Ronaldo using only her feet.

In a video shared by ESPNFC on their official Twitter handle, Fateme is seen giving finishing touches to her work of marvel. As per the tweet, she has told ESPNFC that she would love Portugal and Juventus star forward Ronaldo to see her work.

Iranian artist Fateme Hamami, who has 85% paralysis of her body, painted this portrait of @Cristiano using only her feet. She told us she would love for him to see it 🙌

As per reports, Ronaldo has returned to Italy after being locked down in his native Portugal for almost two months amid coronavirus pandemic.

Media reports in Italy state that the star forward landed in Turin airport in his private jet from the Portuguese island of Madeira. The 35-year old will now spend two weeks in quarantine.

Serie A sides have returned to individual training on Monday with Juventus recalling their 10 overseas players.

It is hoped that Serie A fixtures could resume between May 27 and June 2 — with an end date for the season of early August. However, no formal date has been announced for the resumption of the league, even before empty stands.

Ronaldo was part of Juventus” last Serie A game, a 2-0 victory over Inter Milan behind closed doors at the Allianz Stadium on March 8.

The former Real Madrid and Manchester United forward returned to Madeira after the Inter match to be by his mother Dolores” side as she had suffered a stroke.