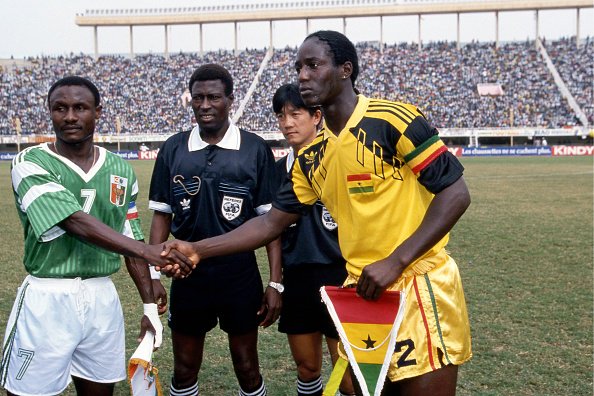 Former Black Stars and Eintracht Frankfurt goal poacher, Anthony Yeboah has revealed that the decision to not make him the captain of the team in the 1992 African Cup of Nations final affected his performance in the defeat to Cote D’Ivoire.

With captain Abedi Ayew suspended for the final following his semi final booking against Nigeria, Tony Baffoe was handed the captain’s armband to lead the team out against their West African neighbours Cote d’Ivoire ahead of more senior members of the squad like Kwesi Appiah and Tony Yeboah himself.

The decision, which then head coach, Otto Pfister claimed was a directive that came with a letter from Accra, reportedly de-stablized the team and contributed to the their defeat.

The former Frankfurt captain has now disclosed in an interview with GTV that he took offence to the decision and admitted it might have contributed to his poor performance in the final.

“I was a little bit angry. I will try to score, I hit the bar, it wasn’t working and we lost the final,” he began.

“To be honest I was very surprised and at the same time, the Kumasi group was shocked so it was affecting us during the game. They knew I was the assistant captain. That time Tony Baffoe was new in the national team and shouldn’t have been captain. I think this situation affected us a lot. Before the game, Otto Pfister told us that we have a letter from Ghana that Tony Baffoe should be captain. Everybody was shocked and it affected the team,” he said.

For Yeboah, that whole Senegal ’92 has left a lasting mark in the team and the subsequent crop of players have been caught in a similar web.

He says: “Every tournament, we seem to have a little problem and football doesn’t work like that. The team has to be together, you need unity. Since we didn’t win in 1992, you can see there is a problem either with captaincy, money or something. We have fantastic players but these things affect us.”