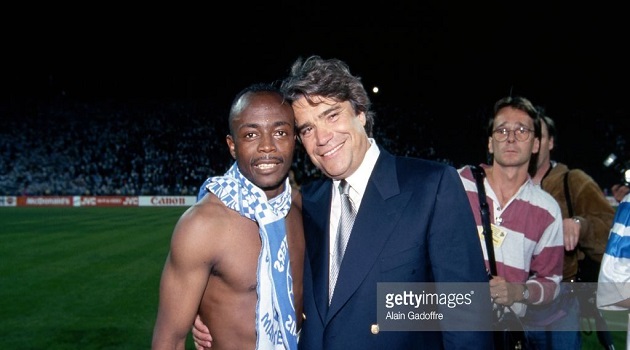 Winning combo: Abedi Pele (left) and Bernard Tapie (right) during their days together at Marseille in the early 90s (Image credit: Getty Images)

Abedi “Pele” Ayew is loved in Ghana to bits and rightly so.

He inspired so many footballers (including his three sons: Rahim, Andre and Jordan) and will continue to do so for years to come but it turns out he was the star of the show at Olympique Marseille especially in the team’s run in the 1993 UEFA Champions League campaign.

He set up Basile Boli with a corner and he duly headed it home to give the French team their only European title till date.

The magic of Ayew’s showing that night in Munich earned him the best player award on the day but all that would not have been possible without the love, support, belief and sheer admiration of Marseille’s rich owner at the time, Bernard Tapie.

The team had lost the likes of Chris Waddle and Jean-Pierre Papin but those departures did not bother Tapie who was sure that Ayew was the right man to bring the European cup to the south coast of France.

“Tapie used to tell the French press that having Abedi in the team could make a difference and we did in 1993. I was special to him and he called the Black Maradona.

With every match that I created chances and scored, he gave me special gifts that I would not mention.

Recently, I visited him in France when he was unwell and I can say that the special bond was there and he told me that I was his favourite,” Ayew said on GTV Sports Plus in an interview on their programme, ‘Time With The Captains’

In the same interview with GTV Sports Plus, Ayew revealed that before eventually coming into his own at Marseille, he had a rivalry with Jean-Pierre Papin but Tapie’s preference for him eventually led the French forward to leave Marseille and give Ayew the space to shine.

“Papin and I were not friends; we were team mates and we were working for the team. In 1992, Papin realised that Tapie and the leadership of the team preferred me to him and so, he had to leave for AC Milan.”