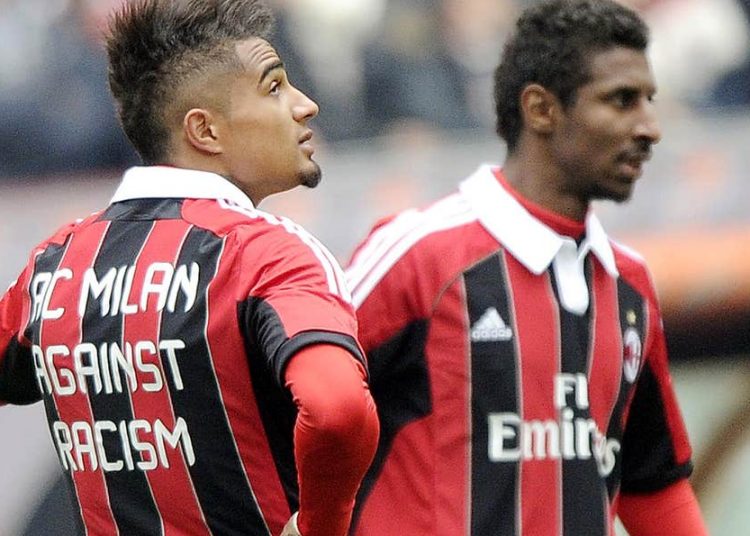 Ghanaian footballer, Kevin-Prince Boateng has accused the world’s leading athletes of failing to contribute enough to the fight against racism in sports.

Boateng, a victim of racist abuse himself while playing in Italy, believes that players of colour who are subjected to racist chants get nowhere near the support needed from their colleagues to create a significant shift.

Speaking of his appreciation for the global outrage to the killing of an African-American, George Floyd, after an officer kneeled on his neck for almost nine minutes, Boateng called for similar outspokenness from stars on issues of racism in football and other sports.

“I’m happy to see everyone posting Black screens in support of the black community over the latest events of racial injustice. But why are we so scared to speak out when racism has been going on for many years and is the very cancer that is eating our sports world?” Boateng said in a statement posted on Twitter.

He questioned whether “white sports stars” with massive social media presence and platforms refused to speak out strongly and publicly against racism because they were afraid of losing sponsorships or followers.

“Over the years we’ve seen people of colour in the sports world, myself included, being abused by fans but white players are unable to come out publicly to support people who suffer this abuse. Are people just scared to lose endorsements or followers?” Boateng quizzed.

Kevin-Prince Boateng noted the worldwide fervour that had accompanied the stay-at-home social media trends and challenges, that various players engaged in during the COVID-19 lockdown and joked that maybe more footballers would speak out if a “Speak Up challenge” was created.

“During the past weeks of worldwide quarantine due to the coronavirus pandemic, everyone was comfortable with doing social media challenges and live videos. It was beautiful to see how we were all one big happy family of the human race… Maybe we should start a #SpeakupChallenge,” Boateng said

He urged all sports stars to join the fight against racism, as only a collective effort would make a difference.

Boateng has been a long-time anti-racism campaigner but has often expressed his frustration with the lack of effort being put into ensuring it’s dealt with.

Last November, after Mario Balotelli suffered racist abuse from Verona fans, Boateng tweeted a video of the infamous incident in 2013 when he grabbed the ball, kicked it into the stands and walked off the pitch after he was abused while playing for AC Milan, in a friendly match against lower league side, Pro Patria.

“6 years later NOTHING has changed but we don’t give up! Let’s keep fighting ALL TOGETHER against racism!,” he tweeted.

The incident came under a global spotlight with criticism levelled at Italian football authorities for failing to curb rampant racism in the Serie A and the country’s lower divisions.

In a bid to address the matter, FIFA, which has itself come up for a lot of flak for not putting stricter measures in place to deal with racism set up a taskforce.

However seven years down the line, racism remains a major issue across Europe and particularly in Italian football.

6 years later NOTHING has changed but we don’t give up! Let’s keep fighting ALL TOGHETER against racism! #NOTORACISM #prince10 #handmade pic.twitter.com/fXil7X2U3f