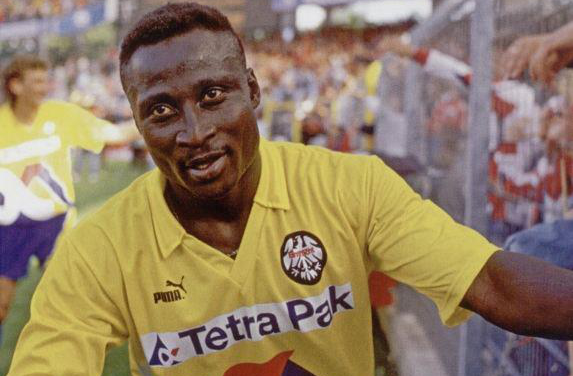 Former Black Stars striker, Tony Yeboah, turned 54 on Saturday and his former club, Eintracht Frankfurt, made sure the world knew of the greatness of Yegoala.

Born in Kumasi on 6th June, 1966, Yeboah played for Asante Kotoko, Kumasi Cornerstones and Okwakwu United before moving to Germany in 1988 to first join 1. FC Saarbrucken.

Yegoala then transferred to Eintracht Frankfurt in 1990, where he became the first Black captain in the Bundesliga during his 5 year stay with the Eagles.

Frankfurt posted on Twitter where they described Yeboah as a legend of the club.

Our former striker, who won the @Bundesliga_EN's top scorer award as an Eagles player in 1993 and 1994 and was the league’s first ever African captain, turns 5️⃣4️⃣ today. 🎁🦅#SGE pic.twitter.com/DzBiTtOtZZ

Yegoala went on to play for Leeds United, Hamburg and Al-Ittihad before calling time on his career in 2002.

He scored 29 goals in 59 games for the Black Stars.