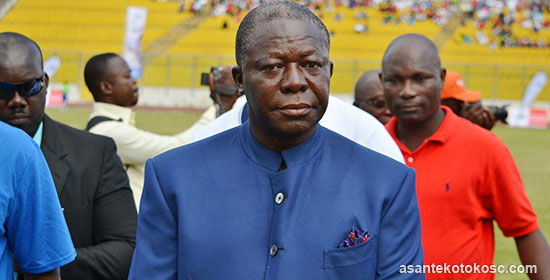 The Asantehene, Otumfour Osei Tutu II, Life Patron of Ghana Premier League side Asante Kotoko, has placed a temporary ban on player recruitment at the club for at least a season, the club has announced.

Instead, Otumfour wants the club to focus on bringing up young players.

According to the Chief of Staff of the Manhyia Palace, Kofi Badu, who communicated the decision to the club, the move became necessary in order to stop the “player attrition rate” at the club.

“The reason is to temporarily stop the player attrition rate and enable us to work with the current crop of players, who the Asantehene thinks have the quality to push the club to the top,” Kofi Badu is quoted by the club on twitter.

"Asantehene Otumfuo Osei Tutu II has directed that the club should not recruit any new player for at least a season," Chief of Staff of the @ManhyiaPalace, Kofi Badu.#AKSC #LetsFightCovid19 pic.twitter.com/2BCLaEGA7j

This is a rare move by Otumfour who often likes to stay away from player recruitment but when you consider Kotoko’s transfer activity in the last 3 seasons, this is not exactly surprising.

Since taking over as Kotoko chairman in December 2016, Kwame Kyei has supervised over 60 new signings at the club in just three years, an average of 20 players a season.

He has also worked with seven different managers in the process, averaging more than two coaches per season.

This is not only ridiculous, but also hampers team stability and chemistry.

The ban though, should not be cause for alarm because Kotoko can still remain competitive with the current crop of players in the team.

A good chunk of the players are young, with the likes of Agyemang Badu, Habib Mohammed, Christopher Nettey, Osei Kwame, Ibrahim Moro, Mathew Anim Cudjoe all yet to hit the prime of their careers.

The ban could end up being a blessing in disguise for Maxwell Konadu, who will no longer be under pressure to add to his squad, while the team can have the freedom to perform better under low expectations.