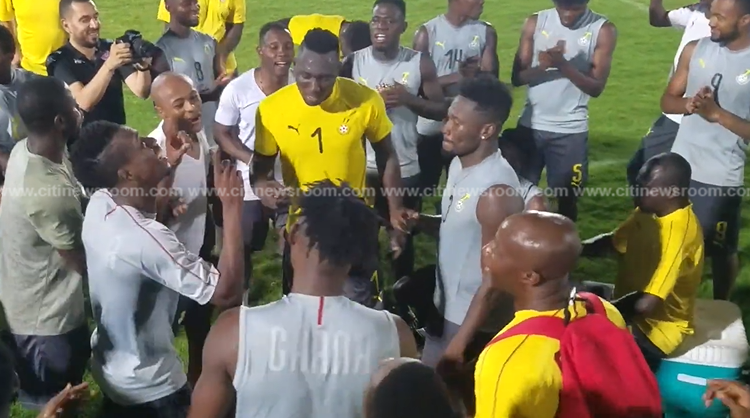 Despite being widely acknowledged to be a strict tactician, Black Stars head coach, Charles Kwablan Akonnor has no immediate plans to ban ‘jama’ sessions by the squad.

The Black Stars are famous for their entertaining ‘jama’ sessions, where they sing and dance prior to their games, especially in major tournaments like the AFCON and the World Cup.

While many have argued that the ‘jama’ before the matches helps ease any nerves the players might have before big matches, others suggest that it results in players not focusing before games and even tiring themselves out.

With Akonnor’s ‘no-nonsense’ reputation, there have been discussions as to whether he will allow these sessions to continue.

However, Akonnor said he cannot see himself cancelling something that has become a staple of the side.

“No. no no. It’s part of us,” he said emphatically

The Black Stars head coach, however, added that he expects periods of concentration from his players prior to their matches.

He admitted that it was important for players to motivate themselves for matches before they enter the dressing rooms and before they walk onto the pitch.

Despite this, he insisted that in the dressing room, it was important for the players to focus on the task ahead of them.

“You can’t be singing all the way to the pitch. When you sing a little, you relax a little,” Akonnor said on Citi TV‘s pidgin sports show Football Made in Ghana.

“Football requires concentration. We could be joking an hour prior to the game but after that, you need to concentrate on the game. You can’t be joking all the time otherwise, you’ll be joking when you get on the field”