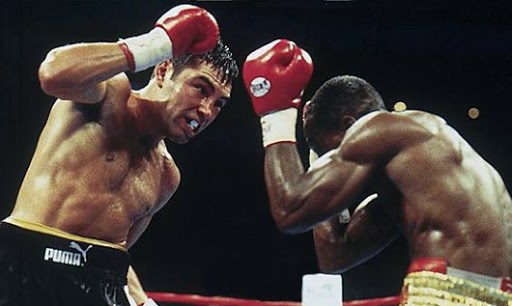 Former World Boxing Association (WBA) welterweight titleholder, Ike Quartey, has stated that he lost interest in the sport after his defeat to Oscar De La Hoya because he felt “cheated”.

The two boxers met in a high-profile welterweight clash in February 1999 in the United States for De La Hoya’s crown.

Despite Quartey dominating the early exchanges, a last round flurry of punches from De La Hoya swayed the fight in favor of the Puerto Rican American who was declared winner by the judges.

In an interview with Graphic Sports, Quartey said that the result bothered him so much because he was treated unfairly.

“I won that fight and everyone knows it. You can’t judge a bout by just a round because the verdict is supposed to reflect 12 rounds.

“He didn’t win the fight but he was only given the win on boxing politics at the time,” an emotional Quartey said.

The defeat to Oscar De La Hoya proved a negative turning point in his career as he found it difficult to stay at the top in the sport.

Quartey will later have the chance to win another title but was defeated courtesy a unanimous decision in April 2000.