Messi and Borjan Krkic? 10 players you didn’t know were related 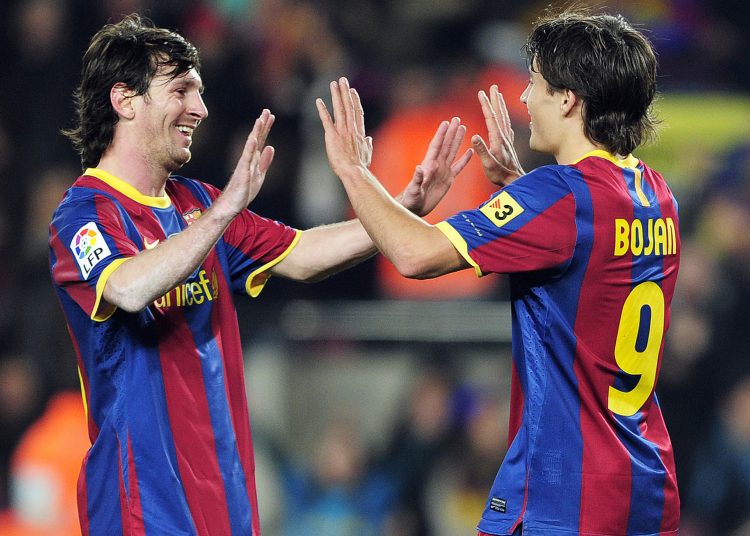 Prepare to be shocked!

It’s quite fitting that in one moment in time both Bojan and Messi were considered wonderkids at Barcelona, and played together.

One would go on to become a club legend with the La Liga giants, while the other flopped at Stoke.

Incredibly, they are (very) distant cousins.

So good they named him twice, and his nephew became a £35million Premier League star.

Okocha graced the Premier League in the early to mid-2000s with Bolton – becoming a club legend under Sam Allardyce.

Former Gunner Iwobi move to Everton this summer, and has been backed by Okocha to become a success.

Well he would, because his sister is Iwobi’s mum.

Perhaps the most brilliant, and unexpected, are these two former Brazilian stars of the Premier League.

Juninho came to our shores in the mid-90s to much furore – and had Middlesbrough fans dreaming of an unlikely success.

They even gave him the unlikely nickname TLF, or the ‘The Little Fella’ because of his 5ft 5in size.

Barcelona star Coutinho was a star at Liverpool, before forcing a £142million move to the Catalans.

The pair are reportedly distant cousins thanks to a great-relative in their family trees.

Astonishingly, Juninho held the record for most goals by a Brazilian in the Premier League until Coutinho broke it.

An unlikely pairing, but said to be related.

The former Leeds United striker Viduka was born in Australia, but has Croatian roots through his father.

Viduka Sr emigrated Down Under in the 1960s.

The pair are distant cousins, but share one thing in common – being fine footballers.

A family link must mean you end up playing in the same part of the world.

Both Dutch internationals, these two ended up in Merseyside – Gini with the Reds, while Drenthe had a spell on loan at Everton.

Wijnaldum has been an unsung hero for Liverpool this season, but it didn’t work out for Drenthe who left the Toffees after falling out with boss David Moyes.

The pair are cousins with Surinamese roots.

The Boatengs have a rich history in football. George Boateng played for Hertha Berlin at some point a a shortlived career.

He grew up with younger brother Kevin-Prince, formerly of Spurs, with their mum in Berlin.

The pair shared the same father with Germany World Cup-winner Jerome Boateng, who is their half-brother.

Both wore blue with pride, but in contrasting situations.

Drogba was a Chelsea legend, winning the Premier League four times, as well as a Champions League title.

Tebily played with Birmingham City from 2002-2008, until they were relegated.

The pair are cousins from the Ivory Coast, with their dads being brothers.

Drogba actually shares the Tebily last name, but dropped it when he went into football.

Although Rafinha dropped the Alcantara name when he made it pro, he is the brother of Bayern Munich playmaker Thiago.

They both rose through the ranks at Barcelona together, and have sports in their blood.

Their father is former Brazil international Mazinho, who won the World Cup in 1994.

While mum Valeria is a former volleyball player.

Interestingly, both chose different international pathways too – with Thiago opting for Spain and Rafinha going with Brazil.

Through generations the Sturridges have terrorised defenders.

Simon Sturridge kicked it all off with Birmingham City in the late 80s, eventually ending his career at Shrewsbury Town.

His younger brother Dean became a feared Premier League striker at Derby County, before spells at Leicester City and Wolves.

But it was their nephew Daniel who would enjoy must success, playing for Liverpool and England.

Both capped at international level by Holland, Fer and van Aanholt are in fact cousins.

Their parents came from the small island of Curacao, before emigrating to the Netherlands to raise their kids.

And lucky for them, they both discovered football and went on to play at every youth level before appearing for the first team.

The pair even played against each other in 2014, when Fer’s QPR faced off against van Aaanholt’s Sunderland – with the West Londers winning 1-0.

Wonder if they were on talking terms after the match?