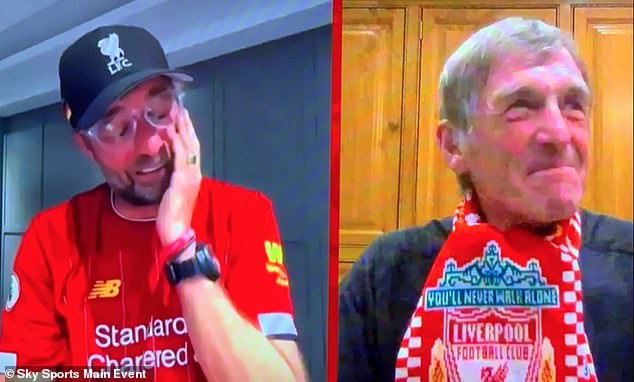 Jurgen Klopp fought back tears on Thursday night as his record-breaking Liverpool side were finally confirmed as Premier League champions.

Manchester City’s 2-1 defeat at Chelsea ended the title race and gave Liverpool the trophy they have been craving for 30 years. Klopp and his players watched the Stamford Bridge game at a hotel on Merseyside and were exultant at reaching their ultimate goal.

Klopp was overcome with emotion and said: ‘We had to convince people and that is what we did together. It is a big moment. I am completely overwhelmed. I had no idea it would feel like this.’

Fans congregated in their thousands outside Anfield, rushing to the stadium after the final whistle, and Klopp dedicated a triumph that has been five years in the making to them.

‘It’s for you,’ he said. ‘It is incredible. Celebrate it at home or in front of your house. It is a joy.

‘My coaching staff, I could not be more proud of what a lot of people in Liverpool did. It has been a very exciting ride since the first day. We enjoy this moment. It is the best thing I can imagine. It is more than I could dream.

‘We are in a bubble. I know it is difficult out there for a lot of people. These moments are unforgettable. We will create pictures in the parade for all of our supporters when we can celebrate in a proper manner.

‘It is a mix of the history you created, we are compared with that. We had to write our own story. We have a wonderful mix of players, all winners. It is so incredibly difficult in this competition but consistency drives us.’

Liverpool won it with seven games to spare and Klopp was overcome with the emotions of the night.

On Sky Sports, he was paired up with Sir Kenny Dalglish – the last manager to lead Liverpool to a league title back in 1990. Dalglish said: ‘I’m very pleased for everybody connected to the football club. Since Jurgen’s come in, he’s done an unbelievable job. The camaraderie.

‘When he came in, he was a fantastic coup. Brendan may have been unlucky to get the sack, but when Jurgen came in… he was unbelievable. They’ve been at it, and around about it, for a few years.

‘Jurgen’s been absolutely fantastic, on the pitch with the players and off the field with everybody connected to the football club. He’s been a credit.’

Klopp, 53, was immediately overcome with emotion and said: ‘I have no words. It’s unbelievable. It’s much more than I ever thought would be possible. Knowing how much Kenny has supported us, it’s for you. It’s for Stevie (Gerrard). It’s for all.