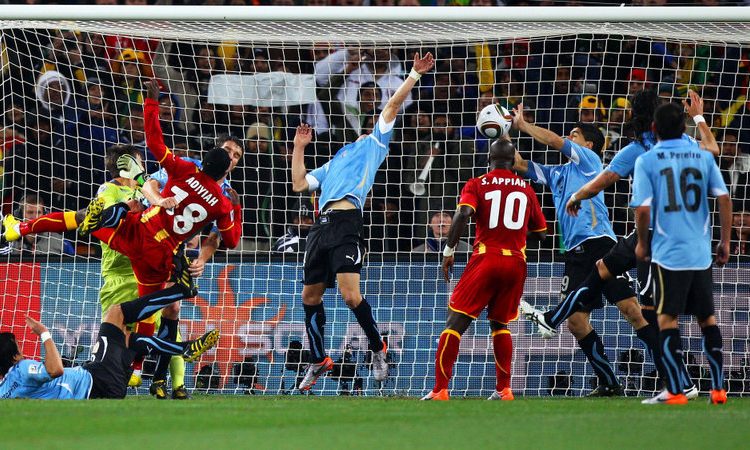 Black Stars defender, Jonathan Mensah, says he looks back with anger and hurt every time he sees highlights of the Luis Suarez handball incident that resulted in Ghana’s exit from the quarter finals of the 2010 FIFA World Cup.

With the game locked at 1-1 and heading for extra time, a goal bound short from Dominic Adiyiah was scooped out of goal by Uruguay’s Luis Suarez.

Ten years later, Citi Sports caught up with Jonathan Mensah who played in defense for Ghana that night and he said the incident is a reminder of how cruel football can be.

“I think about it sometimes, especially when I see the video; I think about it throughout the day. It’s something I’ve put behind me in life but whenever you see the highlights, yes, painful night,” Mensah to Citi FM.

“It hasn’t changed a lot in me but I’ll say that it shows that some people are willing to go the extra mile for their team to win, whether it’s good or bad.

”In that situation, we all saw that Suarez was willing to go the extra mile for his team to win but obviously that was illegal.

”But at the end of the day, my perspective is always the same. Football is a cruel game and things like this happen,“ Mensah said.

”In our team. We wouldn’t do that. If someone wants to score against us, we would do everything possible to stop it as the rules allow but Suarez took all the risks and it paid off and he’s celebrated as a hero by his people.

”It’s not good for his name and his reputation obviously but they moved on to the semi finals and that’s all they care about.”