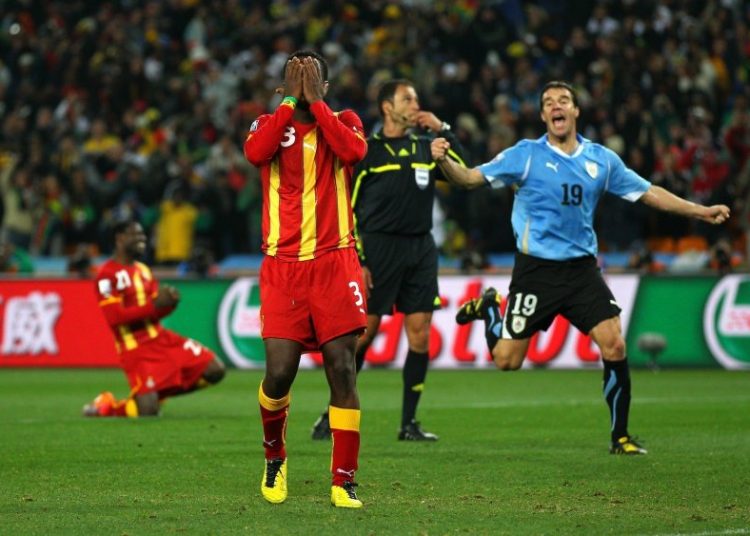 Black Stars of Ghana striker, Asamoah Gyan, says missing the penalty kick against Uruguay in the quarterfinals of the 2010 FIFA World Cup is a memory he will never forget.

July 2nd is perhaps one of the days Ghanaian fans will not forget.

Not because the Black Stars won the World Cup but that penalty miss by Asamoah Gyan on the 120th minute of the game in Johannesburg.

The day that evokes memories of regret, disappointment and pain; years on, the memories live with us.

The Black Stars were on an impressive run of form, carrying the hopes of Africa on its back.

Ghana beat Serbia, drew against Australia, lost to Germany and then beat the United States of America in the Round of 16. This form made them the third African country to make it that far in the FIFA World Cup history.

However, it is that Gyan’s miss that eclipsed the whole campaign for the four-time Africa Cup of Nations winners.

Years on, the striker, Asamoah Gyan says that penalty miss is one memory he can never forget.

Honestly, I have not watched the game. I always go back and watch the penalty and that is the only thing I watch. People tag me in it on Social media and I just watch it and shake my head. I wish we could go back again and have that penalty but life goes on. It is something that I will never forget,” Gyan said on 3 Sports.

Ghana made it to the quarter-finals of the 2010 FIFA World Cup beating the USA in the Round of 16 to become the third African country to reach that milestone.

Cameroon was the first in 1990, followed by Senegal in 2002 and then the Black Stars of Ghana.

Ghana lost the quarter-finals to Uruguay on penalties after a 1-1 drawn game at the Soccer City in Johannesburg.

Penalty misses from Dominic Adiyiah and John Mensah meant Uruguay progressed to face the Netherlands. Ghana lost 4-2 in the shootouts.