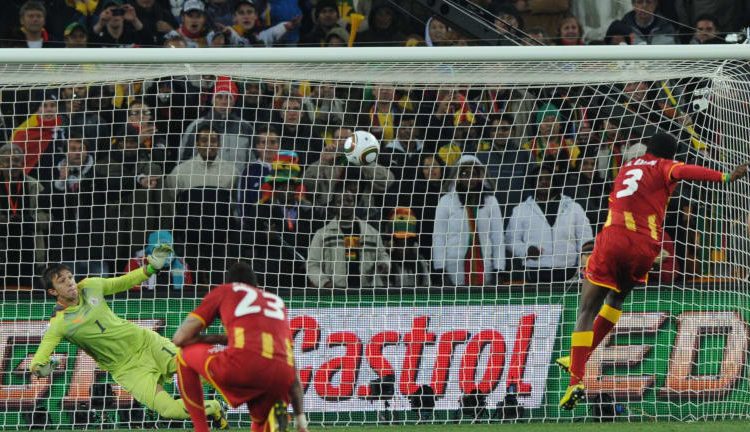 The Black Stars of Ghana 10 years ago rewrote the scripts of African football by reaching the quarter-finals of the 2010 FIFA World Cup in South Africa.

However, eclipsing a fantastic journey in making Africa and the country proud is that Asamoah Gyan’s penalty miss against Uruguay.

On the brink of becoming the first African country to make it to the semifinals of a FIFA World Cup, Asamoah Gyan had only Fernando Muslera to beat between the sticks but he missed from 12 yards, sinking Ghanaian and African hearts.

How did the penalty come about?

A cross was whipped from the right flanks, a flick into the box. A shot inside the box by Stephen Appiah, a goal-line clearance was made.

Ball finds its way into the air, still inside the goalkeeper’s box. A header in by Dominic Adiyiah, threatening to give the Black Stars of Ghana an extra-time win.

Then mimicking the “Hand of God” by Maradona, this time Luis Suarez leaps from the ground and parries the ball to safety, the result, a penalty kick to Ghana.

The African hope dashed by a single kick

Asamoah Gyan appointed himself. He had scored two penalties in the group stages already, one against Serbia and the other, against Australia.

Fair to say he had every right to kick that ball to send the vuvuzela to sound louder and perfect the scripts of African and world football.

But he missed. Yes, Asamoah Gyan missed. He smashed the ball so hard it hit the crossbar and sailed over.

The Black Stars will subsequently lose the game on penalties, with Sebastian Abreu winning with a panenka against Richard Kingson.

10 years down the line, Ghanaian and sports fanatics have not forgotten.

Not to celebrate the failure of a man and a country but the pain it left a continent.

The “what ifs” talks have been going on for all these years. Many fans have taken to social media to talk about it.

Expressing how much that hurts even 10 years after.

However, Asamoah Gyan is not pleased with this constant remind yearly. He tweeted: “We celebrate failure more than achievements. Me di333 I dey my corner dey enjoy myself. My family is very proud of me. That’s what matters to me the most”

We celebrate failure more than achievements. Me di333 I dey my corner dey enjoy myself. My family is very proud me. That’s what matters to me the most 🤷🏾‍♂️🤷🏾‍♂️💪💪🙏🙏

The memories live with Ghanaians forever. Long gone but not forgotten.

Today in History, exactly 10 years ago, on 2 July 2010, Ghana’s Asamoah Gyan missed a penalty in the dying seconds of extra time against Uruguay denying Ghana a chance to become the first African team to reach the World Cup semi-finals which broke hearts across the continent. pic.twitter.com/RDvfNSDIMO