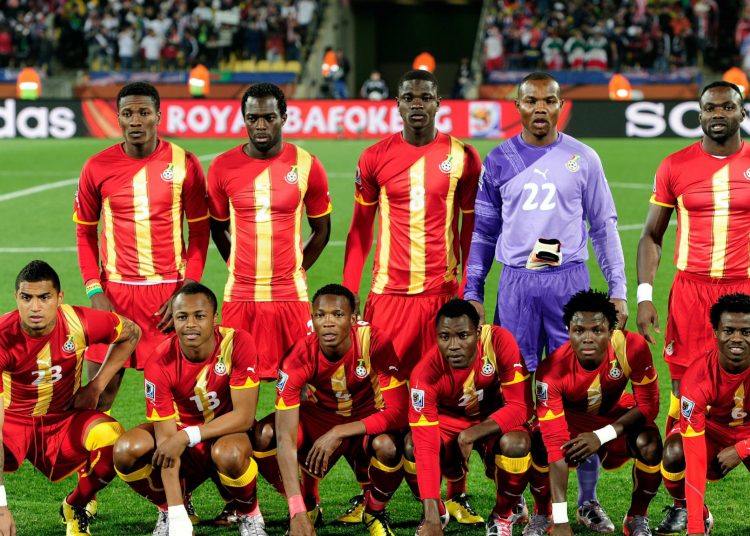 RUSTENBURG, SOUTH AFRICA - JUNE 26: The Ghana team pose for a group photo during the 2010 FIFA World Cup South Africa Round of Sixteen match between USA and Ghana at Royal Bafokeng Stadium on June 26, 2010 in Rustenburg, South Africa. (Photo by Stuart Franklin/Getty Images)

Ghana’s fairytale run in the 2010 World Cup in South Africa made a number of players in the Black Stars squad household names across the world.

While some have lived up to the hype and continue to thrive, others have since fallen off the map.

Ten years after that magnificent tournament, we take a look at the career paths of the 23 players picked to represent Ghana in South Africa.

Goalkeeper, Richard Kingson, was a mainstay for the Black Stars at the 2010 World Cup. He started all five matches in the competition only conceding four goals in South Africa.

With his reputation enhanced further, he moved to Premier League club Blackpool from Wigan. He spent one year at Blackpool before having stints at Doxa Katokopias, Balikesirspor and Great Olympics before retiring in 2016.

Daniel Agyei made it into the World Cup squad while at Ghanaian club Liberty Professionals. He moved to South African club, FS Stars, before rejoining Liberty in 2014.

He then played for Medeama and Tanzanian club, Simba SC before moving to Ethiopia to play for Jimma Aba Jifar – where he won the national championship – and Sebeta.

Hearts of Lions keeper Stephen Ahorlu, made a move to Medeama before playing for Wassaman United, Medeama again and finally Hearts of Lions.

He was appointed Lions’ goalkeeping coach in 2017.

Then Fulham defender, John Paintsil, played in all of Ghana’s matches in the 2010 World Cup. He left Fulham for fellow English side Leicester in 2011.

Following his time there, he joined Hapoel Tel Aviv, and South African clubs Santos and Maritzburg before retiring from the game.

Mensah was at on loan at Granada from Serie A club Udinese during the tournament. He moved to Evian in France without making a single appearance for the Italian side.

He signed for Russian club Anzhi Makhachkala in 2016 before heading to Columbus Crew in the MLS where he was appointed captain.

Mensah was at Premier League club, Sunderland during the World Cup and missed just one game – against Australia – at the tournament.

Mensah will be most remembered for his penalty miss in the shootout against Uruguay but throughout the competition, he was a rock. He moved to French club Lyon in 2011 and Stade Rennais in 2013 before calling time on his career.

Samuel Inkoom started Ghana’s last two games at the World Cup in South Africa, against USA and Uruguay. He moved to Dnipro in Ukraine from Basel in 2011, and after loan stints with Bastia in France and Greek side Platanias signed for D.C. United in the MLS.

Inkoom is currently on the books of FC Samtredia after joining them from Dunav Ruse.

Lee Addy started for the Black Stars against Australia and came off the bench in the quarter-final against USA in South Africa.

Since the World Cup, Lee Addy has played for Red Star Belgrade, Dalian Professional in China, Dynamo Zagreb, Lokomotiv Zagreb, Cucaricki in Serbia, Kusaka Dynamos and FS Stars in South Africa. He was recently seen in a video with some other Ghanaian players stranded in Ethiopia, requesting government’s help to return to Ghana.

Hans Sarpei was a constant on the left side of Ghana’s backline at the World Cup playing in all the games. He joined Schalke from Bayer Leverkusen the next year.

He left Schalke in 2012, retiring soon after.

Then a player at Hoffenheim, Isaac Vorsah remained there for two more years after the World Cup before signing for Red Bull Salzburg.

Stints at FC Liefering and Ohod Al-Medina followed, but he has been without a club since 2018.

Since the World Cup, the older Ayew brother has played for Lierse SK (after his move from Zamalek), Asante Kotoko and Belgian club, Europa, where he remains.

Kwadwo Asamoah has had a tough time with injuries in recent years but he was ever-present for Ghana in South Africa.

Then at Udinese, Asamoah secured a move to Juventus in 2012 where he remained for six years before signing for Inter Milan in 2018. He has played eight times so far this season.

Who could ever forget Muntari’s wonderful goal against Uruguay? He missed Ghana’s opener against Serbia, came off the bench in the next three matches before starting against Uruguay.

He joined Sunderland on loan from Inter Milan in 2011 before heading over to AC Milan on loan the next season. After leaving Inter, he signed a permanent deal with AC where he stayed for three seasons before signing for Saudi club Al Ittihad in 2015. Muntari played for Pescara, Deportivo La Coruna and Albacete. He’s been without a club since leaving the Spanish club in 2019.’

Kevin-Prince Boateng made an instant impact for Ghana at the 2010 World Cup, starting all five matches. He also scored Ghana’s opener against USA. He signed for AC Milan on loan from Genoa whom he had left Portsmouth for a month earlier in a controversial transfer.

He eventually joined Milan permanently for moving on to, Schalke, returning to Milan, signing for Las Palmas, Frankfurt, Sassuolo, Barcelona and Fiorentina. He’s currently on loan at Besiktas from Fiorentina.

The speedy winger came off the bench for the Black Stars in their first two matches at the World Cup but didn’t appear again for the rest of the competition.

After signing for Malaga from Al Sadd, Owusu-Abeyie played for Panathinaikos, Boavista and FC Nijmegen before retiring in 2017.

Stephen Appiah came off the bench for the Black Stars against Serbia, USA and Uruguay. Appiah signed for Cesena from Bologna after the tournament.

Afterwards, he joined Serbian club, Vojvodina in 2012 before retiring.

Coming off captaining the Black Satellites to World Cup glory in 2009 and helping the Black Stars reach the AFCON final, Ayew was billed for big things in South Africa. He started all of Ghana’s games at the World Cup except the quarter-final against Uruguay. After the tournament, he became a key player for French club Marseille where he spent eight years of his career.

After three years at the Hammers, Ayew returned to Swansea but signed for Turkish club Fenerbache on loan after the Welsh side was relegated to the Championship. Returning to the Swans after his loan spell, Ayew has enjoyed a brilliant season so far as he hopes to guide the side back to the Premier League. He has scored 13 goals and contributed six assists.

Derek Boateng did not make a single appearance at the 2010 World Cup for Ghana. Then at Getafe, Boateng moved to Ukrainian club Dnipro in 2011. In 2013, he signed for Premier League club, Fulham.

After he left Fulham in 2014, he played for Rayo Vallecano, Eibar, Rayo OKC in the USA and Greek club Ofi Crete before retiring.

Having served as both the hero and villain in the Black Stars World Cup campaign, Gyan saw his already high reputation rise further with his World Cup performances – he scored three goals.

He earned a move to Premier League club Sunderland that year although he left a year later to UAE side, Al Ain. After further moves to Shanghai SIPG (China), Al-Ahli (UAE) and Kayserispor (Turkey), Gyan has settled in Indian club, NorthEast United, where he has scored four goals in eight matches.

The “Prince of goals” started on the right-hand side of Ghana’s attack for the first three games of the competition before being dropped for the matches against USA and Uruguay.

Tagoe, who was playing for German club TSG Hoffenheim at the time of the tournament, moved to Partizan Belgrade in 2011 on loan. Between 2011 and 2019 he played for a host of clubs including Bursaspor (Turkey), Club Africain (Tunisia), Kelanta FA (Malaysia), Tudu Mighty Jets (Ghana), Isparta Davraz (Turkey) and Chitagong Abahani (Bangladesh). He’s currently without a club.

Dominic Adiyiah had his chance to be Ghana’s hero in South Africa taken away from him by Luis Suarez on the line and missed a penalty in the shootout. Following the tournament, he moved on loan to Reggina from AC Milan.

He also spent time on loan at Partizan, Karşıyaka and Arsenal Kyiv before moving permanently to Ukraine in 2012. After a year there, he played for Atyrau and Nakhon Ratchasima, where he spent three years from 2015 to 2018. He played for Sisaket in Thailand for a year before moving to Chiangmai Utd.

Matthew Amoah came off the bench for cameos against Australia and Germany at the 2010 World Cup. Amoah moved from NAC Breda where he had played for four years to Mersin IY in Turkey, in 2011.

He then played for Heerenveen, then Heracles, Barionie and RKSV Halsteren before retiring.