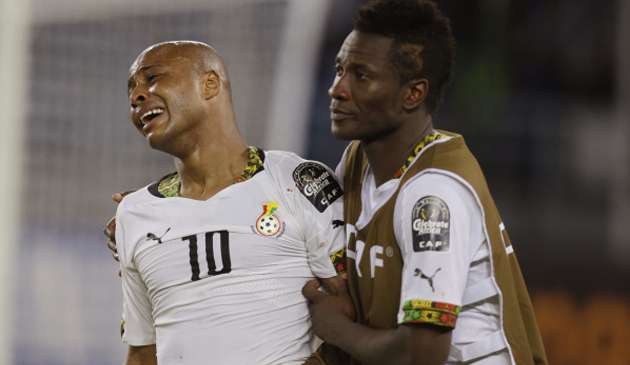 Ghana and Yeni Malatyaspor midfielder, Afriyie Acquah confessed that he can’t watch a repeat of the 2015 AFCON final with Ivory Coast and had to beg a restaurant manager to change a channel when it was showing a repeat of his penalty miss.

Led by Avram Grant, the Black Stars reached the finals of the competition for the first time since 2010, desperate to win an AFCON title that has proved elusive to Ghana since 1982.

However, the Black Stars came up against Ivory Coast, a familiar opponent from 1992.

After a goalless draw following injury time, the game headed to a penalty shoot out, just like it did in 1992. Ghana took the lead after Ivory Coast missed their first two kicks, but Afriyie Acquah, Frank Acheampong and Razak Brimah missed from the spot and the Black Stars consequently lost 9-8 on penalties.

Acquah. who was named the Man of the Match in the final, said the entire squad knew his dexterity from the spot, hence, prompting then-coach Avram Grant to reshuffle the penalty-taking order for him to go next when originally, he wasn’t next.

“All the players in the squad knew my skill from the penalty spot. I never missed a kick at training. I am very good at penalties.

“In fact, when the Ivorians missed their second penalty, Grant changed the kicking order just so I could go and take that kick. I was confident in the approach to the kick but these things happen. I missed,” the 28-year old told godfred.substack.com

“I have still not watched that game. I remember when we returned to Ghana from Equatorial Guinea, I went out with my family to eat at a restaurant. When we entered the TV in the restaurant had the game on replay. I begged the restaurant manager to change the channel for me.”