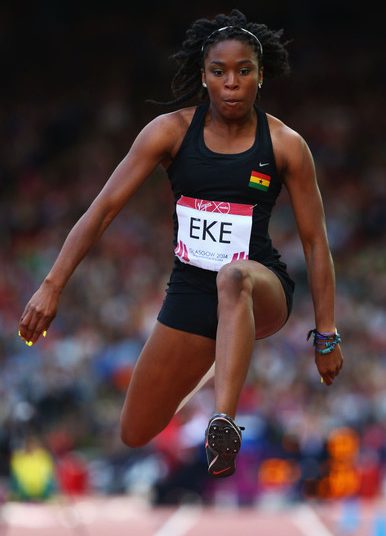 Ghanaian triple jump Athlete, Nadia Eke, has criticized government for always expecting athletes to win medals without a willingness to invest in training them.

She’s the national record holder in the Triple Jump and has already qualified for the now rescheduled Tokyo Olympic Games.

Ghana has won just 4 medals in the history of the Olympic Games and Nadia says for that to change, the country needs to begin investing in the sport from the grassroots level.

“It begins from the grass root level.

“Why aren’t we investing in our own talent, why aren’t we cultivating that talent first of all, so that those people can go up to the highest level and accomplish X,Y,Z and then that could come back and reflect on us as a country, she explained to Athletics Africa”

“I think everyone looks at Usain Bolt’s career, especially in Ghana and I remember I was on a show once and they said, if Usain Bolt came to Ghana, the president will go and greet him.

“But you are an African champion and you have a national record and the president doesn’t even know your name,” she continued.”

“We look at those countries and we are thinking, look at Usain Bolt but he was cultivated from the grass root level, they invested time in his talent and now they are reaping the benefit of his talent.

“But for us, we are not doing that and we are expecting to reap the benefits of something we haven’t sown.”

Eke is an African triple jump champion from 2016 and a silver medalist from two years before that in Marrakech.