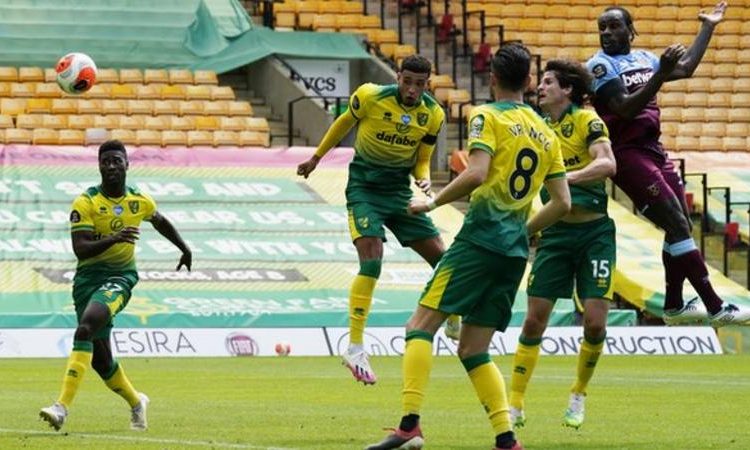 Norwich City became the first club to be relegated from the Premier League this season as Michail Antonio scored all four goals to ease West Ham’s troubles near the bottom of the table.

A seventh successive league defeat left Daniel Farke’s side anchored at the foot of the table, 13 points from safety with only three games – and a maximum nine points – to play.

Having struggled to adapt since winning the Championship last season, Norwich’s third relegation in seven seasons was sealed by Antonio’s superb performance in front of goal.

The forward volleyed the first from inside the six-yard area after Issa Diop’s flick from a corner before using his head to guide Mark Noble’s free-kick beyond Tim Krul.

Hammers skipper Noble also provided the ball over the top for Antonio’s hat-trick. Krul saved his initial shot but it fell invitingly for the West Ham player to head over the line. His fourth was a tap-in after Ryan Fredericks’ pass.

West Ham’s first Premier League away win under David Moyes lifts them six points above the relegation zone, with two of their remaining three matches at home to fellow strugglers Watford and Aston Villa.

Their 24th league defeat came after an abject performance, the Canaries failing to score for a league-high 17th game this season.

Argentine midfielder Emiliano Buendia tested Lukasz Fabianski while Teemu Pukki, who has not scored since netting his 11th league goal of the season on 22 January, headed a good chance wide.