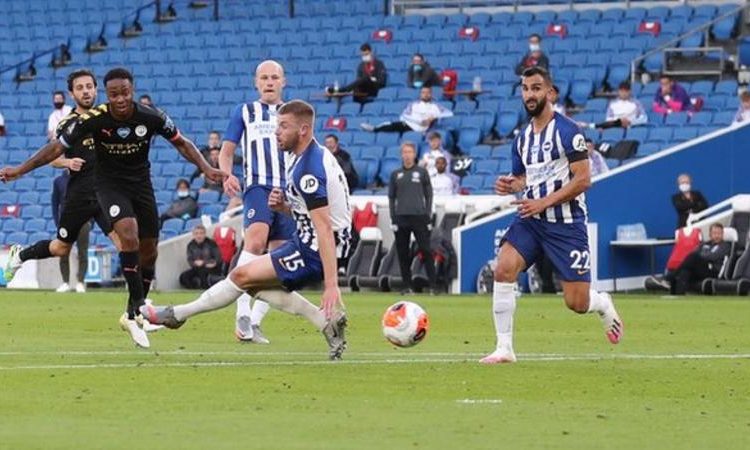 Raheem Sterling scored his third hat-trick of the season as Manchester City swept Brighton aside to ensure they will finish in second place in the Premier League.

City had lost their three previous away league games, including a defeat at Southampton last Sunday, but they never looked like suffering another slip-up on their return to the south coast.

Sterling, who now has 27 goals in all competitions for City this season, inflicted most of the damage on a Brighton side who never managed to make the game a contest.

The England forward put Pep Guardiola’s side ahead with a superb low finish from outside the area, collecting a Gabriel Jesus flick and cutting in from the left before firing into the opposite corner of the net.

More chances followed for City, and Jesus had a shot deflected against the bar before he got on the end of Rodri’s knockdown from a corner to make it 2-0.

The punishment did not end there for the Seagulls, as City continued to pour forward with Kevin de Bruyne pulling the strings, although a 19th league assist of the season eluded him.

The Belgian fired a free-kick against the post after half-time and it was his driving forward run that led to Riyad Mahrez crossing for Sterling to head home City’s third goal at the far post.

Moments later it was 4-0, when Mat Ryan spilled Bernardo Silva’s shot and the Portuguese followed up to tap home.

Sterling, whose previous hat-tricks came against West Ham and Italian side Atalanta, had the final word in bizarre fashion when he chased a pass into the area and saw the ball bounce off the back of his head and cross the line as he was challenged by Ryan.

Brighton were completely outclassed and did not manage a single shot on target.