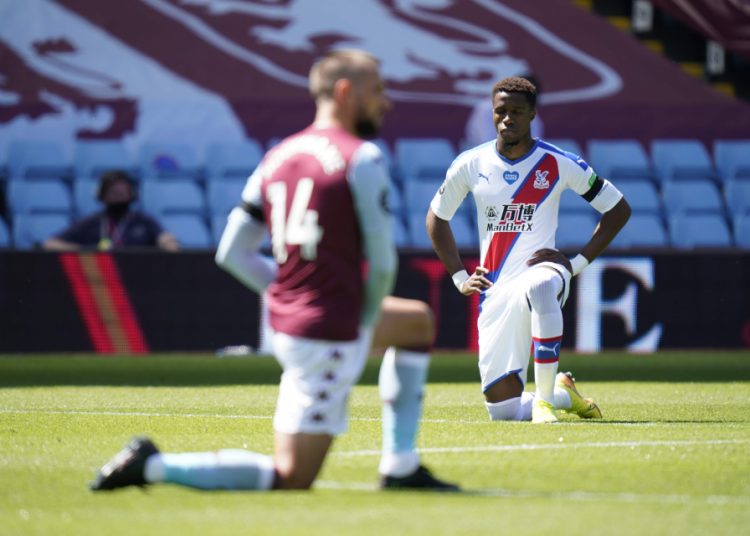 West Midlands Police have arrested a 12-year-old boy after a string of racist messages were sent to Crystal Palace star Wilfried Zaha.

Ahead of the Eagles’ trip to Aston Villa, Zaha took to Twitter to reveal the extent of the abuse that he’d received by a social media user called ‘jackdolan_avfc’, who appeared to be a fan of the Villans.

Woke up to this today. pic.twitter.com/Zal0F96htJ

One message read ‘you better not score tomorrow you black c***’ before the user added ‘or I’ll come to your house dressed as a ghost.’

Zaha was also sent pictures of the Ku Klux Klan, a racist hate group infamous for executing black people, and also an image of an edited box of cornflakes, which instead carried the words ‘c***flakes’ and showed a man with his face blacked up.

The 27-year-old posted the messages on his personal Twitter account, alongside the caption: ‘Woke up to this today.’

And following widespread condemnation, West Midlands Police confirmed on Sunday afternoon they had detained an individual in connection with the racist abuse.

#ARRESTED| We were alerted to a series of racist messages sent to a footballer today and after looking into them and conducting checks, we have arrested a boy.

The 12-year-old from #Solihull has been taken to custody.

Thanks to everyone who raised it. Racism won’t be tolerated. pic.twitter.com/oFxBUvdtV1

“We were alerted to a series of racist messages sent to a footballer today and after looking in them and conducting checks, we have arrested a boy,” a statement read.

“The 12-year-old from Solihull has been taken to custody. Thanks to everyone who raised it. Racism won’t be tolerated.”

The Premier League also condemned the discriminatory abuse that Zaha received in a similarly strongly-worded statement.

“This behaviour is completely unacceptable and the Premier League stands alongside @wilfriedzaha in opposing this, and discrimination in any form,” they said. “There is #NoRoomForRacism, anywhere.

“We will continue to support players, managers, coaches and their family members who receive serious discriminatory online abuse.

“Through our dedicated reporting system, we can take immediate action on cases like this.”

Speaking ahead of the game at Villa Park, Palace boss Roy Hodgson said he supported Zaha’s call to make the direct messages public, as well as condemning the content of them.

“I think it’s important,” he said in a pre-match interview with Sky Sports.

“I think it is being highlighted very much anyway with the Black Lives Matter movement, and everyone seems to be making such an effort to eradicate this type of behaviour.

“It is very saddening on the day of a game that a player wakes up to this cowardly and despicable abuse.

“I think it is right that Wilf made people aware of it; I don’t think it is something he should keep quiet about.

“I think it is very good that our club, Aston Villa and the Premier League are doing everything they can to find out who this despicable individual is and one can only hope that they will get identified and they will get called to account and they will pay for these actions.

“There is literally no excuse; there is no excuse at all.”

West Midlands Police were quick to respond to Zaha’s tweet, replying from their official account: “Hi Wilfried, we are looking into who the owner of this account is and would encourage you to report it to your local police force too.”