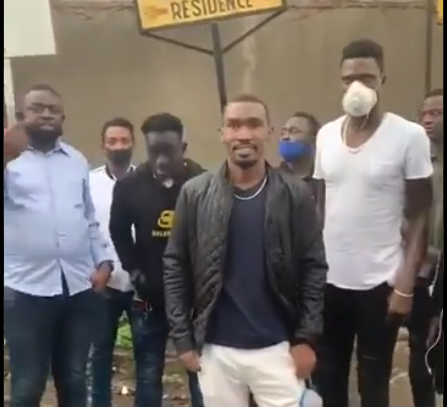 The Ghanaian players who made a video to complain about being stranded in Ethiopia as a result of the coronavirus induced lockdown have arrived in Ghana, Citi Sports can confirm.

With Ghana’s borders closed to international travel since March, 2020, the players had been stuck in Ethiopia for more than two months following the decision of the Ethiopian football federation to cancel 2019/2020 league season on May 5, 2020 and

A contingent of 21 players arrived late Friday night via a bus from Lome, having arrived in the Togolese capital with a flight from Addis Ababa early Friday morning.

They were immediately taken to the Ghanaman Soccer Center of Excellence in Prampram where they will now undergo a 14 day mandatory quarantine.

On June 23, 2020, a video surfaced on social media of a group of Ghanaian players led by former Medeama goalkeeper Muntari Tagoe and former Black Stars defender Lee Addy who passionately appealed to government to come to their aide in helping to transport them to Ghana.

Ghanaian footballers in Ethiopia appealing to Ghana Gov't to evacuate them to Accra.

“We beg the officials to come to our aid to rescue us because after our resident permit expires that will further complicate the situation.” Muntari Tagoe said in the video.

Lee Addy then revealed that the Ghanaian Embassy in Ethiopia demanded an amount of two thousand US dollars to evacuate a number of Ghanaian players who ply their trade in Ethiopia.

Right after the video emerged, GFA President, Kurt Okraku took to social media to assure that his outfit was working closely with the Ministry of Youth and Sports as well as the Ghana Embassy in Ethiopia to ensure the players were brought home.

It appears the efforts have since yielded results following the players’ arrival on Friday.