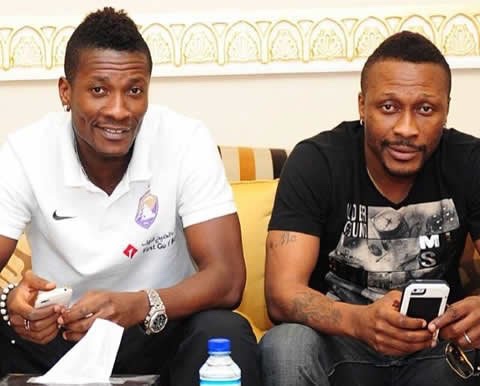 Ghana’s all-time top scorer, Asamoah Gyan, praised the impact of his senior brother, Baffour Gyan on his career path and called him “my second god” apart from the God we serve.

Asamoah Gyan said his brother is like the director of his career and made sure mistakes he encountered on his football journey, Gyan did not repeat them.

“We all serve the living God but I will say, he is my second god because he has done everything for me”, he said on Max TV.

“The mistakes he made in life, he made sure I didn’t go through them. He is like a guardian angel till now”, he added

The two brothers, Baffour Gyan and Asamoah Gyan both played as strikers but it was the latter who excelled at the highest stage.

Asamoah Gyan is Ghana’s most capped player and all-time top scorer; 109 matches and 51 goals. Gyan is the African leading scorer in the World Cup with 6 goals and so many other achievements in his illustrious career.

Asamoah elaborated on how his brother influenced him to choose Accra Academy where he was able to combine football and education.

“He went to Adisadel College and I wanted to follow his footsteps when I completed JHS and I had to choose Adisadel College, so I chose all the Cape Coast schools,” Baby Jet said.

“Baffour said no. All my friends that were in Accra I played with, I saw them playing in the U-17 national team and I was at school,” Asamoah Gyan said reminiscing what his elder brother had told him.

He added that my brother “should have been in that team at that time, so he advised me not to go that far, I should be in Accra, so, that was how I chose Accra Academy.

“My grade was okay so they spoke to the headmaster and he said okay, because I was a football player. So, he was the one guiding me in all these things and it really worked.”