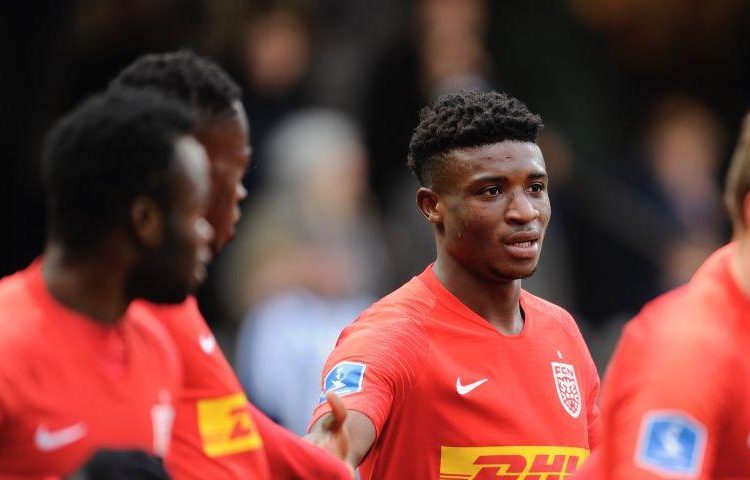 Share on FacebookShare on TwitterShare via Whatsapp
A place at the Right to Dream Academy in Ghana is the hot ticket for any aspiring footballer in West Africa.
That’s why, in a typical year, 25,000 children turn up to their 75 recruitment tournaments, desperate to get one of the 18 scholarships on offer.
“We are the sought-after destination for a talented young kid,” admits Joe Mulberry, the Director of Recruitment for Right to Dream and sister club FC Nordsjælland.
“We arrange recruitment tournaments within each community in Ghana. About 300 kids play in each, so it’s intense, but that’s the only way, within budget, we can assess so many players.” 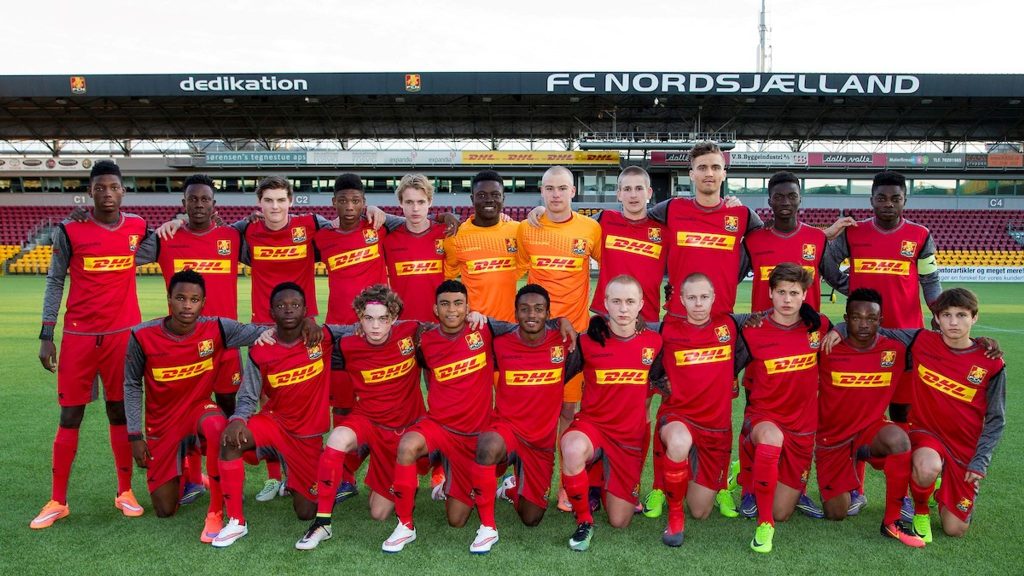 The competition is fierce because the opportunities are unparalleled – not only in Africa, but probably further afield as well. When the Academy near Accra was founded by former Manchester United Africa scout Tom Vernon in 1999, it consisted of one dust pitch.
Now there are eight grass pitches, a gym, LEGO Innovation Studio, dormitories for 90 student-athletes, 60 staff and a Cambridge International School. It’s more than facilities that set Right to Dream apart though. The curriculum and commitment to the players is perhaps unique, for a number of reasons.
PATHWAY
The chosen few who make it through the rigorous recruitment process usually join Right to Dream at the age of 11. Each gets a five-year contract.
“We recruit once a year for the youngest age group and don’t look to swap or change existing players,” Mulberry explains. “They have a guarantee of their time, which settles them down into long-term goals in their development, which is really key.
“For a kid in any country – but especially in Ghana, where the opportunity at the Academy is massive and being released would be a big shock to their lives – giving them stability is really important.”
The Englishman himself has been at Right to Dream for a while, having joined full-time in 2004, shortly after he graduated from Aberystwyth University. He ended up in Ghana by chance, having Googled “coaching jobs abroad” and found the Academy on the second page of the results.
“That really was a lucky break,” he admits, “because this is a values-driven organisation where football benefits and social benefits can meet. People talk about being motivated by their work, but being truly motivated is a different thing.”
Mulberry was promoted to his current role, which covers recruitment at both Right to Dream and FC Nordsjælland, in 2010. A big part of the job is Academy recruitment and he feel he has an ideal scenario, knowing his best players will have a clear pathway into professional football.
“As scouts, it’s really good to know players are going to be developed really well in a holistic and caring environment. It’s easy to bring a player in knowing they’re going to develop.”
In total, 35 graduates of the Right to Dream Academy are playing pro football in Europe and the MLS, with the most prominent being 28-year-old forward Abdul Majid, who is at Strasbourg, having played for the likes of Porto and Spartak Moscow.
The main pro football pathway leads to FC Nordsjælland, in the Danish Superliga, which Vernon bought with the help of investors in December 2015.
“Our overall strategic goal is to have minimal recruitment at senior level, with our first team being made up entirely of graduates from the Right to Dream and Nordsjælland Academies,” Mulberry says.
Currently, there are seven Right to Dream graduates in the Nordsjælland squad – Mohammed Kudus, Abdul Mumin, Isaac Atanga, Maxwell Woledzi, Ibrahim Sadiq, Clinton Answer and Francis Abu. 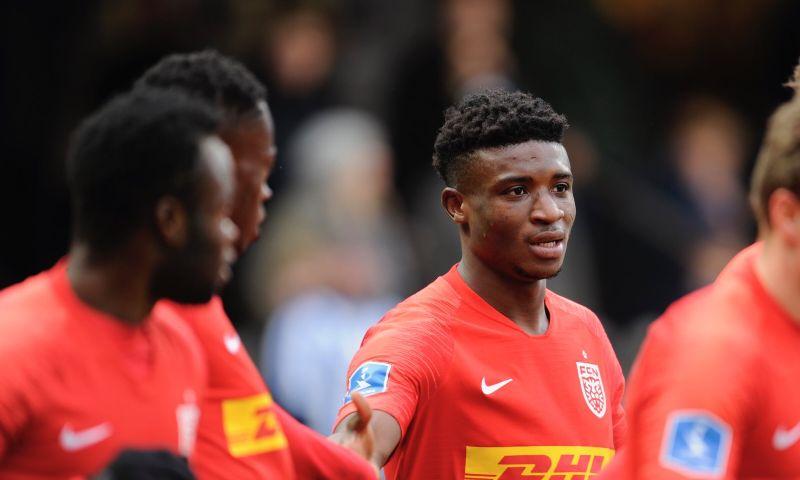 The average age of their squad is 21, the club operates sustainably and they currently sit seventh in the league, so it’s no surprise that Mulberry says “the strategy has worked well so far”.
RECRUITMENT PROCESS
A unique project requires a unique recruitment process.
“A big focus is on getting Academy recruitment right, because this gives us an advantage over our competitors,” Mulberry admits.
At the recruitment tournaments, he and his scouts set a “high technical threshold” and look primarily for “game intelligence and understanding” from the players.
The level of those auditioning is generally higher than it would be at the same age in England.
“A kid growing up in Ghana is in a better position as a young footballer before the ages of 12 and 13,” says Mulberry (pictured). “The weather allows them to play out every day and so does the culture – they’re playing out in the streets, with friends, with local teams.
“They’re just more active than their European counterparts as a general rule. At 12 and 13 things become more structured for the best players in both countries and that gap closes.”
Athleticism is a consideration, but not the priority.
“The physical side is a positive, but in that regard we’re mainly looking for exceptional attributes or de-selecting based on really low physical attributes,” Mulberry explains. “Really, it’s a side issue though, not at the forefront of the recruitment process. At such a young age it’s impossible to predict adult athletic performance”.
Having these big recruitment tournaments is unusual enough, never mind the fact that Mulberry and his staff select on both football and academic ability.
“We have a reduced cognitive ability test that everyone sits when they arrive for a tournament,” he says. “We do that because we recruit players for two pathways – professional and student-athlete.”
CHARACTER DEVELOPMENT
This dual selection process happens because graduates from Right to Dream go not only into pro football, but also into colleges and Universities. Many of those enter the US collegiate system and Right to Dream youngsters have received an estimated $45m of US scholarships in the last 12 years.
Some have gone to Ivy League colleges, while one, Ousseni Bouda, is currently at Stanford University.
In order to prepare pupils for their future studies and careers, Right to Dream has a Cambridge International School on site, with an emphasis on the STEM subjects of science, technology, English and maths, with character development also a key part of the curriculum.
Students are encouraged to think not only about what they can achieve personally, but also about what they can give back to society.
Vernon says: “The core underlying philosophy is we need to empower a generation of leaders and role models who can do something about offering the next generation of Africans the chance to excel on the world stage.”
As you walk into the main building at the Academy, just north of Accra, there is a sign on the wall: “Don’t expect to reach your dreams if you don’t help other people reach theirs.”
When 18-year-old defender Woledzi made it into the first team at Nordsjælland, he asked sponsors Nike to help organise a tournament for girls in Nima, a suburb of Accra. More than 100 girls took part and were provided with hijabs and sports bras in order to do so.
EQUALITY
That brings us onto the final defining feature of the Right to Dream Academy – its commitment to gender equality.
Mulberry oversees recruitment for both boys and girls in Ghana and Denmark and explains: “We have both male and female programmes, because that’s one of our core beliefs – working towards providing equality of access to opportunity for both genders. 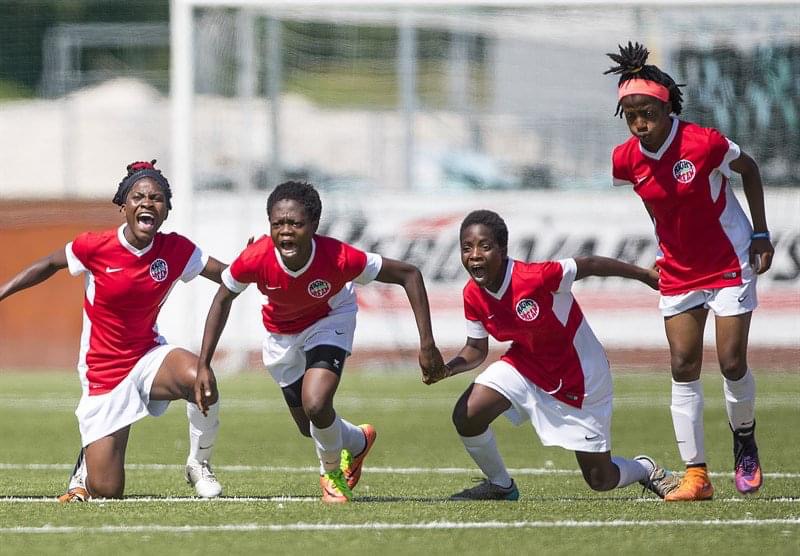 “We are the first residential girls’ Academy in Africa and after we purchased Nordsjælland we established a women’s Academy and senior team at the same time.
“The women’s team started in the highest league they could be registered in and have had three promotions in a row. Now they’re third in the top division in Denmark.
“The programme for the girls in Ghana is a great opportunity for them. There is very limited infrastructure for girls’ football in the country before the age of 15, so it has been life-changing for all the girls involved and have been some personal transformations.”
Source: Simon Austin/trainingground.guru
ShareTweetSend
Previous Post