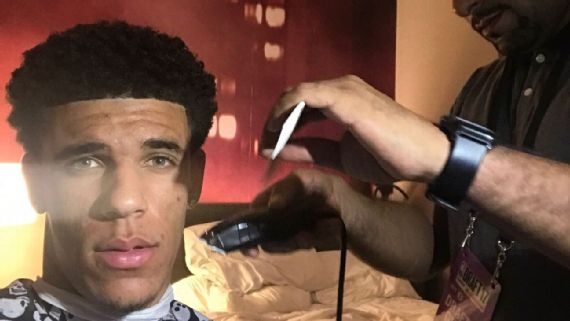 BLADE IN HAND, Mohashie “Mo” Rodriguez carefully guided a straight-edge razor across a customer’s cheek, completing his first pass. It was midday on July 2 at The Cut Stop Barbershop in Miami’s Palmetto Bay neighborhood, and people had been pouring into Rodriguez’s barbershop since the city eased its lockdown rules.

As Rodriguez prepared for his second pass, he heard his nearby cellphone ring and spotted the caller ID: Will Rondo, the 39-year-old brother of Los Angeles Lakers point guard Rajon Rondo.

Normally, Rodriguez doesn’t let calls interrupt his work, but he knew this one was different. So he reached for his phone, cradled it between his shoulder and ear and prepared to resume the shave.

It only took a moment for Rodriguez to know it was the news he had been awaiting: He would be one of six barbers heading inside the NBA’s bubble at the Walt Disney World Resort in Orlando, Florida.

For a period that will last at least four weeks and stretch possibly as long as three and a half months, Rodriguez will be among a select few tasked with cutting the hair of the more than 300 players from 22 NBA teams.

Rodriguez immediately bolted upright and started shouting: “They picked me to be a part of the NBA bubble!” Cheers rang out from fellow barbers. His client, clad with shaving cream and lying reclined in the barber’s chair, congratulated him as well.

On the call, some logistics were explained: He would need to leave the following Tuesday, meaning he had less than a week to prepare for a trip that might last months.

He would have one last weekend with his wife and three kids, ages 19, 16 and 12. Before he arrived at this point, he had talked with his family about this venture. It wouldn’t be easy, but in his 20 years cutting hair, he had been on long trips before.

He has also cut several NBA players’ hair over the past five years, including Rajon Rondo and several other members of the Lakers, among other NBA teams. He knew he had a chance to make the bubble and that his shop could function without him. “It’s only three months,” said Rodriguez, 34.

It was a hectic turnaround from the time he received the call to the time he needed to leave, but at that moment, there was no hesitation — only excitement.

FOR AS UNUSUAL as the NBA’s bubble will be, the league and the National Basketball Players Association are making a concerted effort to provide aspects of normality, such as a players-only lounge with NBA 2K, TVs, arcade gaming and pingpong. There are resort-style outdoor spaces with shade, a setup for card games and pool access. There are trails for running or riding bikes. And, yes, there will be six barbers, three stylists and three manicurists on-site, operating out of one of three barbershops set up in each hotel teams are staying in.

The barbers are coming from all across the country: Daniel Thomas and Willie Brooks are traveling from Los Angeles, and Sedric Salinas is arriving from the Bay Area. Marcos “Reggae” Smith is flying down from New York. Mo Rodriguez is coming up I-95 from Miami, while Joel Padilla, proprietor of Orlando’s Members Only Chop Shop, is already in-market.

The plan is for everyone to quarantine in the bubble for seven days and be ready to open individual barbershops by July 15. The hotels have cleared out suites to accommodate, and each location will be outfitted with professional barber chairs and facial steaming stations, among other accouterments. Grooming equipment will also be provided.

When Smith got the invite into the bubble, the 42-year-old Dominican, who operates out of his studio in Brooklyn, immediately accepted.

“This is potentially the biggest privilege of my career,” Smith said. “It’s a blessing. I feel like an astronaut.”

There will be disposable capes, gloves and masks, and the shops are set up so social distancing can be followed. Specialists are expected to work three to four hours per shift before the shop shuts down and professionals clean it thoroughly. They will be open between 8 a.m. and 10 p.m. daily, and players are asked to dial or text to make an appointment in advance. If the shops become too full or too booked, the staff size might increase. Similarly, staff might be reduced as eliminated teams start to leave the bubble.

“I’m going to tell the rookies that they have to go get their hair cut from the barber first,” Utah Jazz forward Georges Niang said. “And if I like what the barber does, then I’ll be willing to take the risk to get my hair cut.”

Barbers will be paid a flat rate by the NBA and the NBPA and will be able to collect tips as well. Rondo said he couldn’t share specifics about the contract, but Rodriguez pointed out that while a normal haircut at his shop might cost anywhere from $20 to $50, a haircut for an NBA player could yield five times that much, if not more. Rodriguez expects he might perform as many as 25-30 cuts per day, and, over a potential stretch of a few months, he might earn enough to help pay off most, if not all, of his mortgage in Miami.

“For the money, it’s actually a no-brainer,” Rodriguez said.

IT ALL STARTED with Will Rondo. More than a decade ago, when his younger brother was drafted into the NBA, Rondo became something of a go-to guy for his sibling, helping coordinate transportation and logistics for the then-Boston Celtics point guard. Soon after, Rondo started handling the same logistics for some other members of the Celtics, then others around the NBA. In 2009, he started a hospitality company, Superior Global Travel & Concierge.

When Rondo heard from his brother that the NBA was going to restart in Orlando, he reached out to NBPA executive director Michele Roberts, whom he has known for years, to ask how he could help.

He knew players were creatures of habit, fond of the same pregame meal, the same warm-up music, the same routine — and that, in Orlando, they’d still want a fresh cut from their barber of choice.

“Part of the NBA is style, it’s swag, it’s charisma,” Rondo said. “I’ve always been taught, when you look good, you feel good, when you feel good, you play good — that type of thing. And barbers are a central part of our NBA players’ appearance.”

So he found an area of need and submitted a proposal to Roberts. The NBPA signed off on the plan, as it was certainly a point of focus among players.

It was up to Rondo to compile a 50-person list. He leaned on the relationships he’d built with barbers and stylists who had become close with NBA players — the ones players would call as soon as their plane landed, or would ask them to make a house call before a national TV game. Roughly a third of them quickly told Rondo they couldn’t leave their family or their business — or both. But many others pitched themselves aggressively, offering up their experience, accolades and high-end clientele.

Smith, for example, has a list of clients that include Usher, Miguel, DJ Khaled and Swizz Beatz in addition to NBA players such as Carmelo Anthony, Kyrie Irving, CJ McCollum, Zion Williamson and Russell Westbrook.

Rondo consulted with the NBPA, the NBA and with individual players, who pushed for their own barbers to be in the bubble.

“Yeah, I can’t say who those guys are,” Rondo said with a laugh, “but I’ve had a few more phone calls [from players] than usual over the holiday weekend to say, ‘Hey Will, is my boy still on the list?'”

It may be even more important because some have let their hair grow out since the pandemic struck. “I haven’t had a haircut since this started,” Indiana Pacers All-Star Domantas Sabonis said last week as players returned to their team facilities.

“I’m not really trippin’ about it,” Holiday said. “I’ll probably take them out soon and just let it rock.”

Ultimately, after weeks of Zoom calls and FaceTime sessions, the list was whittled from 50 to six. Each has at least 10-plus years of experience in their roles and at least five years working with NBA players. That experience and familiarity with players will be important.

Rondo will be there to listen to any specialists if they have concerns. And he’ll be there in case any of the players are especially particular about how their hair will look in a bubble on a high-definition television broadcast.

“Some of these guys got some bad hairlines,” Rondo said with a laugh. “So this is important. I understand that, and I did the best that I could.”