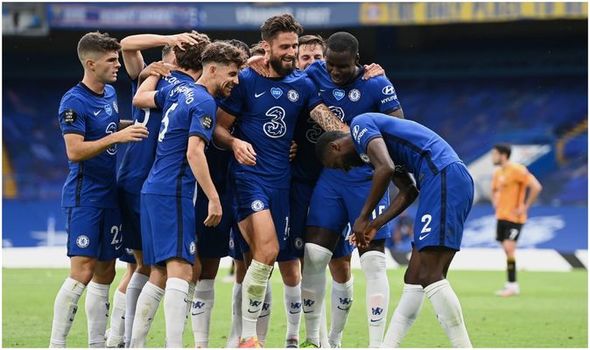 Chelsea sealed fourth place in the Premier League to wrap up qualification for next season’s Champions League with a comfortable victory over Wolves.

Frank Lampard’s side needed a point from the potentially nervy encounter at Stamford Bridge in order to clinch a top-four place – but they stylishly grabbed all three.

Mason Mount’s delightful 25-yard curling free-kick and Olivier Giroud’s effort from close range were just 144 seconds apart on the stroke of half-time and they settled the contest.

The loss means Wolves end the season in seventh place, behind Tottenham on goal difference, after Jose Mourinho’s side drew 1-1 at Crystal Palace.

However, Nuno Espirito Santo’s men face a nervous wait as their league position could still be enough for a Europa League place next season, should the Blues beat Arsenal in the FA Cup final next month.

Chelsea finished on the same points as Manchester United, who beat Leicester 2-0, but Ole Gunnar Solskjaer’s side finish third on goal difference.