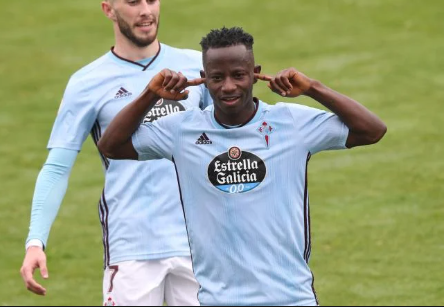 Yeboah joined the Sky Blue lads on loan with the option to purchase from Segunda Division side Numancia last summer.

The 23-year-old failed to break into the side’s first team despite being touted a bright talent by coach Oscar Garcia.

He however managed to clock 20 games under his belt and scored 5 goals in the side’s second team.

The midfielder’s contract at the Balaidos expired on Tuesday, June 30, 2020, but the club have forfeited their obligation to sign him permanently.

He joined the club from Manchester City last summer after successive loans at Lille in France, Dutch side FC Twente and Real Oviedo in Spain.

Yeboah was on the books of Ghanaian club Right to Dream Academy before moving abroad.

The attacker was selected in Ghana’s provisional roster for the recent Africa Cup of Nations in Egypt but failed to make the final 23-man squad for the tournament.