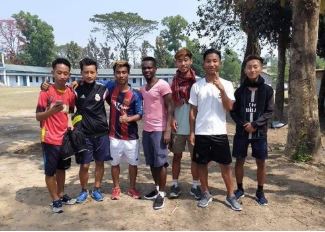 Richard Hanson (middle) with his teammates

More than 30 Ghanaian footballers are stranded all over India, with no means of livelihood or a way back home, Citi Sports checks have revealed.

The players, including former Hearts of Oak star, Richard Quarshiga, are scattered all over India from Kolkata, and Kerala, to Mumbai and New Delhi.

Richard Hanson is in Dimapur, a city in Nagaland, India that is approximately 2,289 kilometres from the capital New Dehli. It will take 39 hours to drive to New Dehli from Nagaland. With each passing day, the Dansoman native is getting frustrated.

Hanson had arrived in Nagaland early this year as coach-cum-player for Nagaland Rising Star Academy on a six-month contract.

His plan was to prove himself and move elsewhere, but the coronavirus pandemic has turned his world upside down.

“Good morning, Mr President. Please, we are footballers in India. We came for trials. I would like you to help us through your power to return.

“We can’t even pay our rent and even to eat is very difficult in this time of Covid-19. Please help us to return home. Thank you,” Richard tweeted in response to a post from the official account of Nana Akufo-Addo, President of Ghana.

Richard wasn’t speaking only for himself. He is the voice of about 30-odd Ghanaian players who had arrived here with dreams of a career in football, but are now stuck with almost nothing.

“It’s becoming increasingly difficult. I don’t have anything. No money and I have to survive by eating rice all the time,” Richard said.

Forson Kojo Obeng is counting the days when he will return home to his family. He had packed his bags and carried little money in the hope that he would, given a chance, impress a few clubs in India. He knocked on some doors, but before the door opened, Covid-19 had engulfed the nation.

“We are three of us in a room here in Kolkata. Whatever little money we had brought from home is over. Now we cannot even afford to pay rent of Rs 9,500 and then we have to take care of our food too. We don’t know what to do,” said Forson.

The Ghanaian footballers, most of them doing duty for lower-ranked clubs and who normally get paid on per-match basis while playing in non-recognised tournaments, had got in touch with the Consulate of Ghana. They were told that a flight is available but $1200 (approx. Rs 90,000) per person was simply too much to pay. Besides, there were additional quarantine charges too.

“We want to move out of India. Cases of coronavirus are on the rise. Our rent and eating is a big problem,” said Richard.

For Stephen Kwasi Mensa, getting home is now a matter of life and death. The Ghanaian defender was doing well with Thrissur-based Jaya Bakery in the lucrative Sevens circuit. He was paid Rs 3,000 per game, if his team won there would be a bonus of Rs 1000. But for the last four months, Mensa is bed-ridden with what the team manager says is a “critical condition.”

“I have informed his family but it’s important that he gets home. With international flights yet to resume, we are all in a fix,” said club manager Rafeeq P B.

Since the 26-year-old defender has not played, Jaya Bakery is not obliged to pay. Yet, Rafeeq, other club officials and even the All Kerala Sevens Football Association have been digging deep into their pockets to pay the Rs 25,000 that is needed to tide over the crisis every month.

Professional footballers have been helped by their respective clubs with lodging and boarding during the hour of crisis.

However, those who landed here hoping to make the cut have been left to fend for themselves.

Earlier this month, the Ghana Football Association in collaboration with the government of Ghana repatriated 21 Ghanaian footballers who were caught in a similar ordeal in Ethiopia.

Hanson and his colleagues hope by telling their story, help will soon come their way.