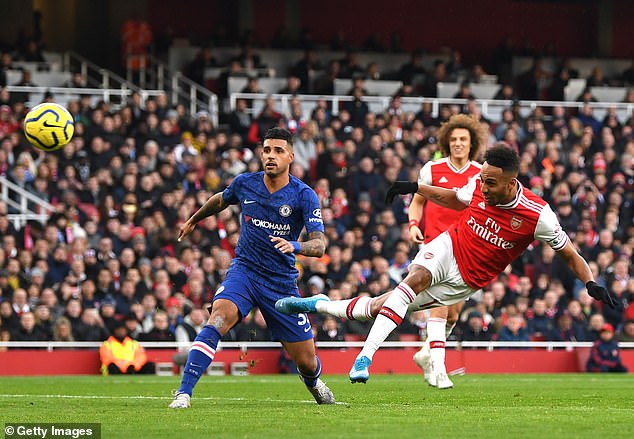 Chelsea were sounded out over a stunning move for Pierre-Emerick Aubameyang in January.

Sportsmail understands that contact was made on behalf of the Arsenal striker – who is set to line up against their London rivals in Saturday’s FA Cup final – but that high wage demands saw off what would have been a shock switch.

The 31-year-old, whose contract expires at the end of next season, was said to be keen on a move that would no-doubt have infuriated Gunners’ supporters.

But insiders said that a subsequent request for a staggering salary – which would have made him comfortably the highest-paid player in Chelsea’s history – put an end to the prospect at the time.

Aubamayeng signed for Arsenal from Borussia Dortmund for £56m in 2018. Since his arrival, only Mohamed Salah has scored more Premier League goals than his 49.

Chelsea manager Frank Lampard is currently looking for a striker, but the Gabon international would have to lower his demands to make the prospect of a deal a reality.

Aubameyang has scored 27 goals this season and Arsenal manager Mikel Arteta will be desperate to keep him, with the likes of Barcelona and AC Milan circling.

Fans fear that Wembley may see his final outing for the Gunners, although much will depend on the result.

Should Arsenal defeat their rivals, they will qualify for the Europa League and the increased revenue that would bring will raise the likelihood of them being able to tie the striker down.