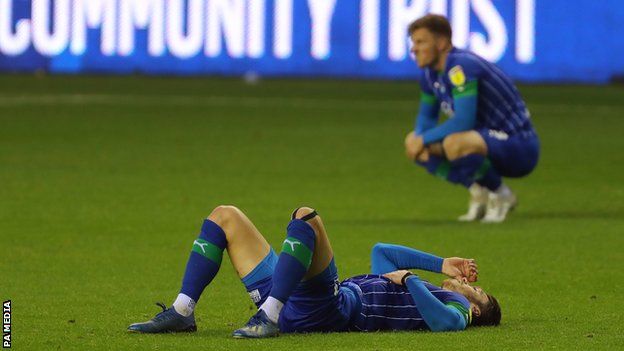 Wigan’s relegation to League One has been confirmed after they lost their appeal against a 12-point deduction for going into administration.

Wigan appealed against the punishment on the grounds of ‘force majeure’.

But an independent arbitration panel ruled against them, meaning Barnsley will stay in the Championship.

The Latics went into administration on 1 July when their new Hong Kong-based owners conceded they could not support the club financially.

Force majeure events are usually defined as certain acts, events or circumstances beyond the control of the involved parties, such as natural disasters, war or a pandemic.

The timing of Wigan going into administration meant that their penalty was applied following their 1-1 draw with Fulham on the final day of the season.

Without the punishment, the Latics would have finished 13th in the table, but once the points were deducted they ended up second-from-bottom.

Wigan said: “The club put forward a strong case and naturally we are disappointed at the decision. The first-team management will now prepare the team for next season’s League One campaign.”

In a statement, the English Football League added: “The decision of the arbitration panel is final and legally binding.

“The EFL will continue to engage with the administrators to provide its full support in all ongoing matters with the aim of achieving a long-term future for the club.”