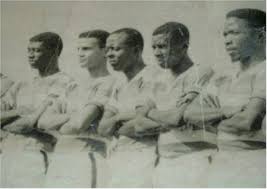 Football in Ghana has served up some of the most bizarre but interesting stories over the years.

From teams refusing to field the maximum number of players due to superstition, to referees being chased off the pitch by angry fans, Ghana has had its fair share of controversies on the field of play.

In the 1988/89 Ghana Premier League season, four teams; Hasaacas, BA United, Eleven Wise and Man U served up what will probably go down as the most bizarre story in GHPL history.

In a season that was characterized with controversy and court action, Hasaacas and BA United headed into the last day of the league tied on 21 one points in the relegation battle, with BA United’s superior goal difference of three goals giving them the slight edge.

Secondi Hasaacas faced neighbours Secondi Eleven Wise on the last day, knowing their only chance of survival was either to better the result of BA United, or win with a bigger margin than United, in case the Brong Ahafo side also won their home game against bottom of the table Man U.

There were strong suspicions before the game, that the matches would be fixed, and what ensued raised even more talking points.

The public were infuriated by these results, prompting the Ghana Football Association to take action.

The results were rendered null and void by the Ghana FA, who banned all four clubs in involved for 6 months, in addition to a ₵250,000 fine to each of the four, to be paid in 10 days.

Eleven Wise and Man U, later had their bams extended to two years, after they failed to pay their fines within the stipulated time.

The sanctions imposed on the clubs by the GFA were later in the year removed by the Ministry of Sports.