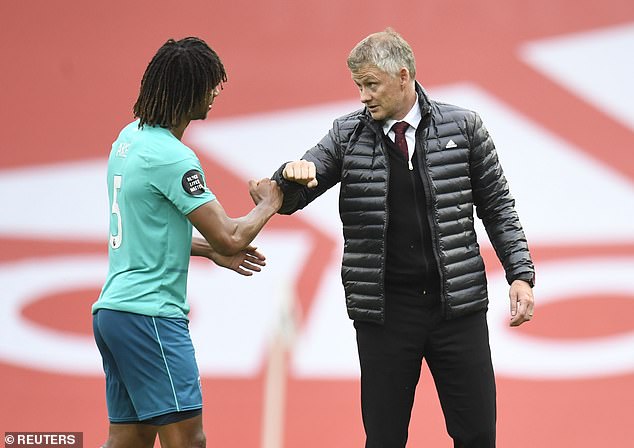 Manchester United were interested in signing Nathan Ake before rivals Manchester City beat them to land the £41million defender, according to reports.

The Dutchman completed his move from Bournemouth to the Etihad on Wednesday but United were also in the market for a left-footed centre back with Ake fitting the bill perfectly.

Sky Sports report that the Red Devils needed to raise more funds before launching a bid for the 25-year-old with most of Ole Gunnar Solskjaer’s transfer budget dedicated to the chase for Jadon Sancho.

The United boss appeared to cheekily tap up Ake during his side’s 5-2 victory over Bournemouth in July.

Solskjaer gave the defender a fist bump as he walked off the pitch and said: ‘Good luck’.

After he replied, ‘cheers, thank you’, the 47-year-old appeared to follow up with: ‘We need a left-footed centre back so keep going.’

The club have so far failed in their attempts to sell Marcos Rojo, who has not made an appearance since November 2018.

Chris Smalling’s proposed move to Roma also appears to be off with the Serie A side unwilling to meet United’s asking price.

Ake has already racked up 146 Premier League appearances, with Hector Bellerin and Luke Shaw the only defenders under the age of 25 with more.