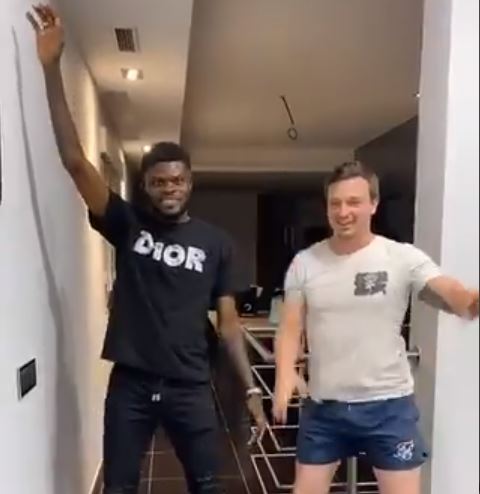 Amid speculations that Thomas Partey has contracted Coronavirus, the midfielder has released a funny video of himself dancing to kill off the rumours.

The 27-year-old released a video of himself and his agent, Jose Daniel, a representative of JJ Sports dancing in a viral video that will definitely make your day.

His club side, Atletico Madrid confirmed that the two players who contracted COVID-19 were Ángel Correa and Šime Vrsaljko.

Atletico Madrid confirmed that Ángel Correa and Šime Vrsaljko were the two players that tested positive for COVID-19.

The Black Stars midfielder is expected to travel to Lisbon, Portugal after recovering from an injury for the quarter-final clash in the UEFA Champions League against RB Leipzig.

The box-to-box midfielder has been phenomenal for the Spanish giants and is looking forward to helping his side win this season’s UCL.

Thomas Partey is heavily linked with a move to Arsenal as Mikel Arteta is eager to strengthen his team for the 2020/2021 season.