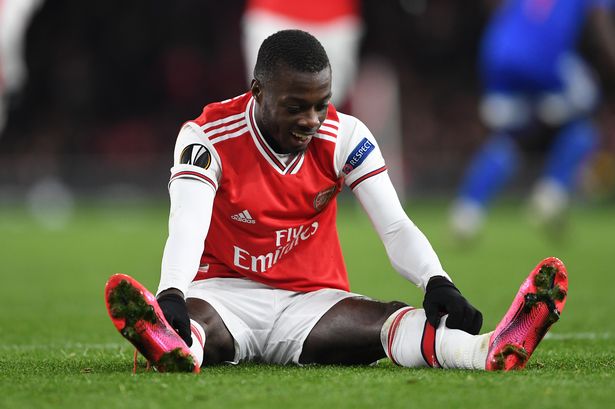 Arsenal‘s efforts to streamline and improve their operations has extended to an internal investigation into whether they overpaid for £72m club-record signing Nicolas Pepe.

Sources have told ESPN the deal has been re-examined as part of the wider recruitment overhaul which led to the departures of a host of scouts including Francis Cagigao, Brian McDermott and Brian Clark as well as several more senior employees based throughout Europe.

Pepe ended his debut season in England with eight goals and 10 assists across all competitions; a satisfactory return despite some inconsistent form. There is said to be no sense of regret at signing the 25-year-old but many people within the game were surprised at the size of the fee Arsenal paid to Lille, especially coming from a club where finances are notoriously tight. The Gunners paid £20m up front but have committed a further £52m over the next five years, the first instalment of which is due this summer. The depth of that commitment has led to a review of the scouting reports and negotiating process which led to such a big deal being sanctioned.

Pepe attracted interest from a number of Europe’s top clubs after impressing in Ligue 1 but sources have told ESPN that individuals working for other clubs who became involved in preliminary talks with Lille were taken aback by the amount Arsenal eventually paid.

Technical director Edu joined the club three weeks before Pepe signed for Arsenal — he held up Pepe’s shirt with the winger at his unveiling — but the bulk of the work on the deal had already been done. Former head coach Unai Emery has previously stated he preferred to sign Wilfried Zaha but Crystal Palace wanted the majority of a similar fee up front and Arsenal opted for Pepe instead.

Edu has led a drive to overhaul Arsenal’s recruitment at all levels — Ty Gooden, Arsenal’s leading scout in France, has also been released — in the belief that a global network is less important than data-driven analysis and forging relationships with key agents.

With COVID-19 a contributing factor to 55 non-playing staff redundancies and further pressure on a modest summer transfer budget, Edu is determined to make every penny count.