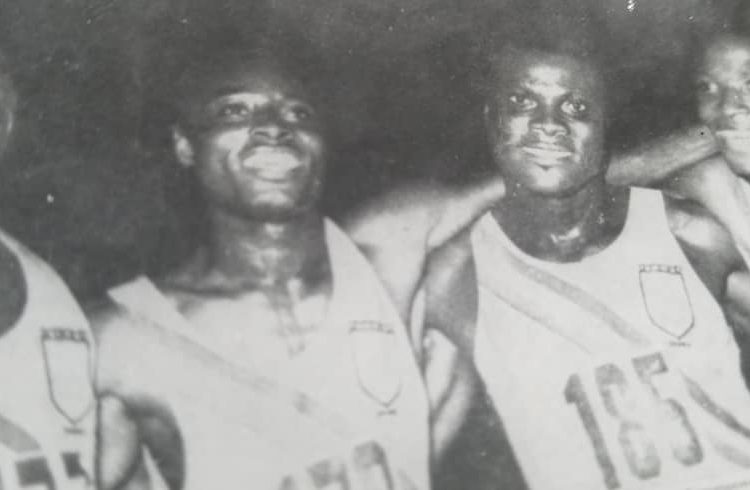 In 1966, Ghana won gold in the men’s 4×110 metre race, beating Jamaica and Australia in the process with a time of 39.8 seconds the Commonwealth Games.

This feat set by the quartet has since not been replicated by any Ghanaian 4×100 team. The closest of any of the teams to reach that feat were silver medals in the 1970s.

Prior to the race, Ghana had set a new Commonwealth record with a time of 39.9 seconds in the 4×110 metres heat and were favourites to claim the top spot.

In lane one was, Jamaica, followed by England, Australia, fellow Africans, Nigeria were in lane four, then there was Wales, Trinidad and Tobago, Canada and then Ghana, who ran from lane eight.

Ghana started the race with James Aryee Add; Oko Addy ran the back straight; Bonner Mends ran the bend and Stanley Allotey brought it home, holding off a late charge by the Jamaicans.

In an interview on Joy FM, Oko Addy, a member of the team described how it felt after winning Gold for Ghana.

“At the starter’s gun, they took off with great speed. Bonner Mends started, I was in second place and that was where the event was won. I went ahead of all the other competitors and ensured that James Addy had a good distance to work within and keeping our lead. Finally, Allotey raced against the Jamaican he had beaten in that race. It was a tight contest between the two and by the time they were about 10 meters away from the finish line, it was too close to call.”

“Allotey had to restrain himself and remain focused to avoid being overtaken by Jamaica who did well to catch up. We finished with a time of 39.8 seconds while they finished on 40 seconds with Australia coming third with that same time.”

“I remember I just screamed and gave my colleagues a big hug. Sincerely, before then I thought that time was unattainable but then I began to think of what next would happen in the subsequent races. It was unimaginable and I struggled to separate reality from fantasy.”

Ghana has competed at 16 different Commonwealth Games, with 1954 being our first and missing only the 1986 Games in Edinburgh, Scotland.

Ghana’s medal table at the multi-sport event stands at 57, including 15 gold, with all but one of those medals coming in athletics.