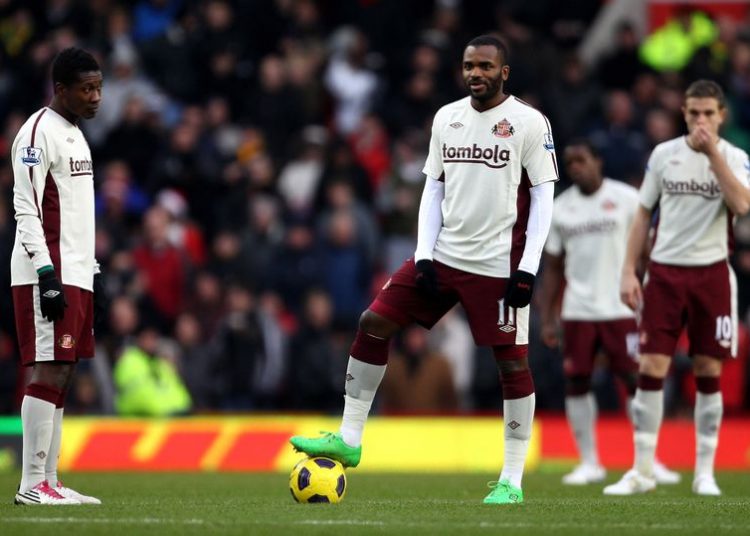 Former England and Sunderland striker, Darren Bent, said it felt a bit odd when he was on top of his game, and then English Premiership side, Sunderland, decided to bolster their attack with the addition of Ghana’s all-time top scorer, Asamoah Gyan.

Steve Bruce, who was the manager of Sunderland signed Gyan after his impressive showings at the 2010 World Cup in South Africa.

Bruce dished out a club record fee of over £13m to sign the then 24-year-old center forward from Stade Rennes in the 2010 summer transfer window.

Bent had enjoyed a good debut season with Sunderland scoring 25 goals in all competitions but returned to pre-season with the arrival of Gyan and Danny Welbeck.

According to him, hearing reports about Asamoah Gyan joining the team in the summer was odd.

“You can’t help but think, ‘what’s going on here?’, Bent told Talk Sports on when clubs bring in a competitor for your position.

“I wouldn’t say it was an issue, but when I was at Sunderland, I had a very, very good season. I scored loads of goals.

“And then I missed out on the World Cup that summer and Asamoah Gyan was fantastic for Ghana that summer.

“I remember reading the paper one day, maybe I was at home or on holiday, and it said, ‘Sunderland have been linked with Asamoah Gyan’, and I thought that’s a bit odd.

“I’m thinking, ‘What is going on here!?’ I stayed, but only until January.”

Asked what his initial reaction was, and if he was sizing Gyan up after his arrival, Bent continued: “Of course. That’s what you do.

“You start looking in training and thinking about what is he good at? What can he do, what can he not do so well?

“Ultimately, in the position I play in it’s just about scoring more goals than them. That’s the way I thought about.”

Gyan left Sunderland in September 2011 just after a season to join UAE side Al-Ain.