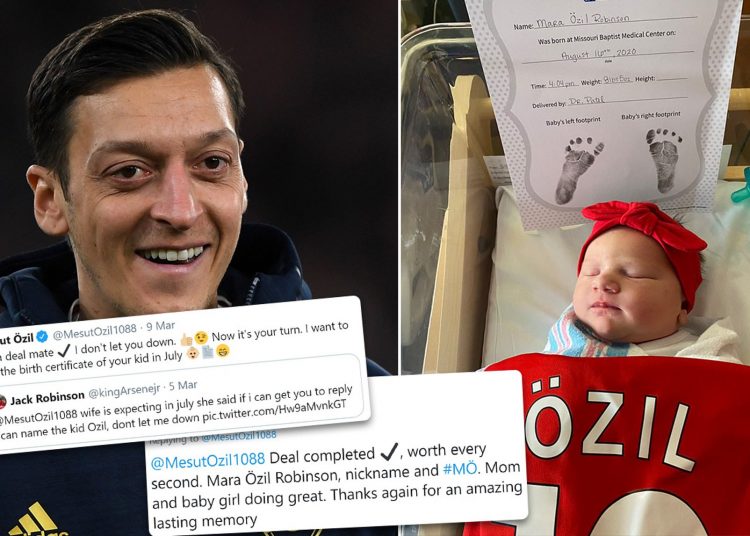 An Arsenal fan, Jack Robinson has named his newly-born baby girl after star player, Mesut Ozil – fulfilling a promise he made to the midfielder on Twitter five months ago.

In March, the die-hard Gunner tweeted to ask the Arsenal play-maker for his help in naming his daughter.

Robinson stated that he was given the green light by his wife to name their daughter after the German international on the condition that the player would respond to his tweet.

Robinson tweeted: @MesutOzil088 wife is expecting in July she said if I can get you to reply, I can name the kid Ozil, don’t let me down”

Four days later, the Arsenal star replied saying: “It’s a deal mate. I don’t let you down. Now it’s your turn. I want to see the birth certificate of your kid in July”

It’s a deal mate I don’t let you down. Now it’s your turn. I want to see the birth certificate of your kid in July https://t.co/GgEjAmKjTu

On Monday, August 17 Robinson took to Twitter to announce the arrival of his daughter and the fact he followed through on their deal.

He shared a picture of his baby girl with an Ozil shirt, saying: ‘Deal completed, worth every second.

‘Thanks again for an amazing lasting memory.’

The German International was quick to respond, saying: ‘Wow, can’t believe you really did it man. Huge congratulations to you and the little family, Jack.’

Wow, can’t believe you really did it man Huge congratulations to you and the little family, Jack #MÖ #YaGunnersYa https://t.co/tVxSxjPbgx

Mesut Ozil had limited playtime at Arsenal in the 2019/2020 season.

Ozil started the first 10 Premier League matches of Mikel Arteta’s tenure before falling out of favour after lockdown.

Ozil played no part in Arteta’s side since football returned after the pandemic as part of Project Restart.

With his £350,000-a-week deal at Arsenal due to expire next year, Ozil has been linked with a move away from the Emirates.

As it stands, a likely destination for the 31-year-old is said to be Turkish side Fenerbahce.