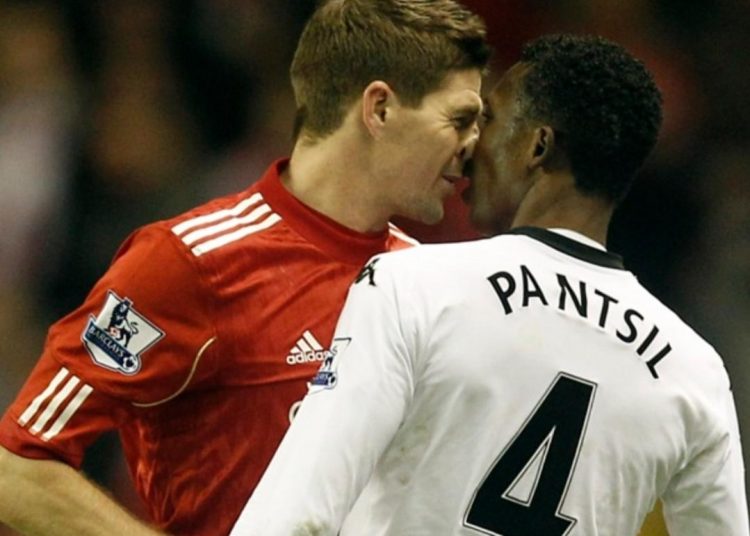 Former Fulham defender, John Paintsil, has built a reputation for himself as an uncompromisingly intimidating opponent to face.

Stories have been told of Painstil’s peculiarly manners – ranging from threatening to break Peter Crouch’s legs to squeezing Yakubu Aiyegbeni’s testicles; the former Ghana right back has done it all.

In an interview with Graphic Sports, Painstil detailed a clash with Gerrard in a Premier League game at Anfield where both players got into a rib-squeezing match that ended in Gerrard almost letting out a scream.

According to the former Ghana international, they were pinching each other’s ribs but were pretending as though they wanted to headbutt to avoid being booked by the referee.

“Gerrard, who was on my heels, kicked me from behind, causing me to lose my balance and fall, so the referee whistled against him”, he told Graphic Sports.

“As soon as I got up, Gerrard rushed on me, held my ribs with both hands, and started pinching me.

“In reaction, I also held the ribs of Gerrard and pinched him so hard that he almost screamed, but the referee, who never saw the action, eventually separated us.

“He (the referee) never noticed the pinching because he only gazed at our foreheads to see if any of us would head-butt for him to flash his card.”

Paintsil played in the Premier League between 2006 and 2012, for West Ham, Fulham and Leicester City.