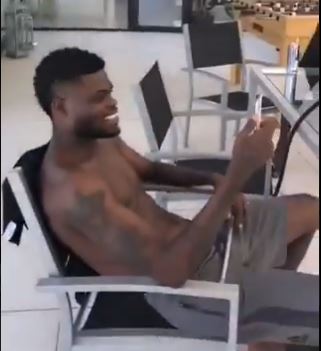 Black Stars midfielder, Thomas Partey, seems to be enjoying his much needed break as he has been recorded jamming to Stonebwoy’s hit song “Putuu”.

Partey who is a big fan of the Afro-dancehall artiste has once again shown love to the singer in the viral video on social media.

The two both grew up in Ashaiman, a suburb in Ghana and are actual friends.

Thomas Partey had a disappointing end to his incredible season as he sat on the bench while his club side, Atletico Madrid got knocked out of the UEFA Champions League at the quarter final stage by RB Leipzig.

The 27-year-old is reportedly wanted by English Premier League side, Arsenal and the Gunners are seemingly confident of acquiring his services for the 2020/2021 season.

The central midfielder has a release clause of £45m with Arsenal hoping to pay by the end of the transfer window.