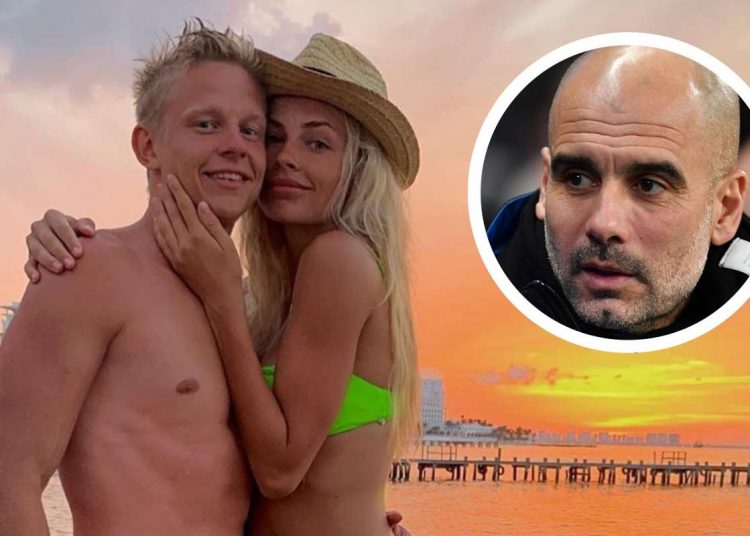 Manchester City defender, Oleksandr Zinchenko, has been forced to issue a statement on his own wedding day admitting new wife Vlada Sedan was wrong to slam Pep Guardiola’s tactics.

Sedan slated Guardiola for ditching his normal back-four to trial a back-three in such an important game.

It also meant hubby Zinchenko was left on the bench for the full 90 minutes.

Speaking on her YouTube channel, Sedan had said: “To put it mildly, and in order not to swear, this is completely Guardiola’s fault.

“At such a crucial moment, making such an experimental tactic for Man City is a bummer.

“I have no right to criticise, but why play three central defenders when the players themselves take their heads.

“I simply have no words, because to have such a line-up… look what players play at Man City, what a bench.”

Zinchenko broke off from his wedding today to issue a statement on his and his new wife’s behalf apologising for her reaction to the 3-1 defeat to Lyon.

It read: “Although my wife is a journalist, she is also a fan.

“During the season she was travelling with us for all away and home games because she is a massive City fan.”

Zinchenko proposed to Sedan inside the 70,000-capacity Olympic Stadium in Kiev last year in front of a heart-shaped display of red roses.

It came after the 23-year-old celebrated Ukraine’s qualification for the now-postponed Euro 2020.

Now, just under a year later, the pair are married, with Sedan posting a sweet picture on her Instagram.