Man United captain Harry Maguire spent £63,000 at the bar prior to arrest 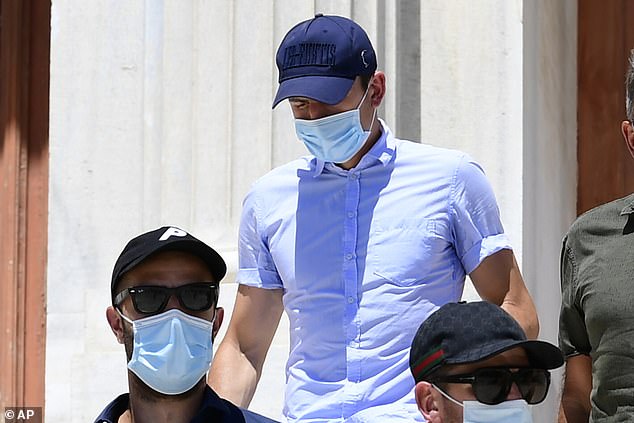 The £190,000-a-week defender flew back to Britain after spending two nights in a cell and appearing in court charged with assaulting a police officer on the Greek party island.

His captaincy of Manchester United and place in the England squad will face scrutiny while legal action hangs over his head.

The Football Association will hold crunch talks Monday over how to manage Harry Maguire’s Greek crisis.

England manager Gareth Southgate, as he routinely does with his senior players, is expected to contact Maguire ahead of the squad announcement.

But discussions with the Manchester United captain will take on far more significance after allegations he was involved in a fight on the Greek island of Mykonos during the early hours for Friday morning, leading to Maguire being arrested and charged.

Maguire’s trial is set for Tuesday and it is understood the player’s legal camp believe they have a strong case as they try to clear their client’s name after he pleaded not guilty to charges on Sunday.

Maguire, 27, reportedly enjoyed a five-hour drinking session on Thursday, racking up a bar bill rumoured to be around £63,000 on vintage champagne, cocktails, steaks and lobster.

He is understood to have been with Chelsea midfielder Ross Barkley, Love Island star Chris Hughes and snooker player Judd Trump, as well as members of his family.

Local media reports claimed that the footballer started fighting to defend his younger sister Daisy after she was stabbed in the arm with a pointed object.

It emerged that Maguire gorged on a £4.50 doner kebab with pals during a boozy night out just minutes before becoming embroiled in a fight that led to his arrest for attacking three policemen.

Maguire, who earns £190,000 per week, wolfed down the kebab after emerging from the exclusive Bonbonniere night club in Mykonos where he had been drinking on Thursday night with a group of friends.

'One stops crime, the other commits it' - Man Utd fans bash Maguire after Lindelof saves woman from robber