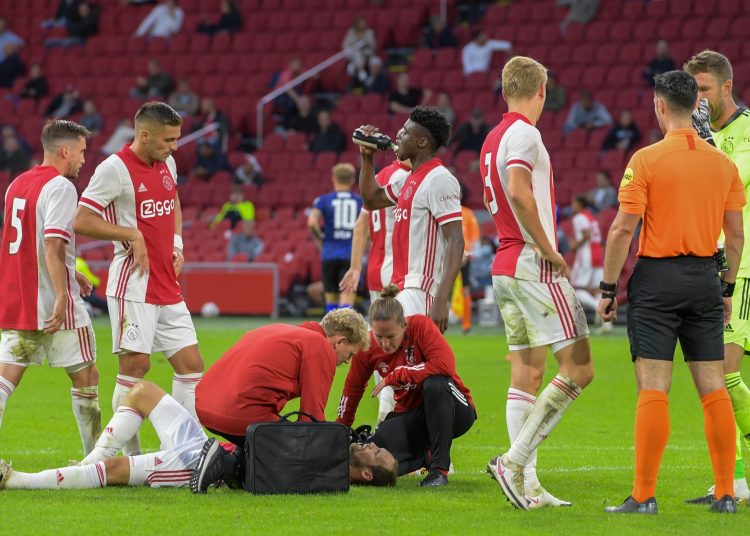 Former Manchester United defender, Daley Blind collapsed on the pitch while playing for Ajax on Tuesday.

Blind, 30, dropped to the field during the latter stages of Ajax’s win over Hertha Berlin and was quickly replaced by Devyne Rensch.

Horrible to watch. Hope Daley Blind is okay. His heart defibrillator went off during a pre season friendly against Hertha Berlin. pic.twitter.com/A5MoNsjPZn

This the second time in the space of eight months the Dutch international has collapsed while playing football.

The Netherlands footballer was diagnosed with heart muscle inflammation late last year after suffering from dizziness during Ajax’s clash with Valencia in December.

He was subsequently fitted with an implanted cardioverter defibrillator and returned to full training in February and helped Ajax win the double for the season.

After the game, the Head Coach of Ajax, Erik ten Haag confirmed that Blind’s subcutaneous implantable cardioverter-defibrillator (S-ICD) went off.

Erik ten Hag: “Daley Blind’s ICD (implantable cardioverter defibrillator) went off. He got subbed off straight away and he is feeling okay now, he is feeling fine. We will do research about this now.” pic.twitter.com/RVDjCZDoKI

“Daley Blind’s ICD went off,” he said to Metro.

The former Manchester United defender, after the incident, was seen communicating with teammates as he left the field without needing assistance.

He will undergo further tests at the hospital later on Wednesday morning.