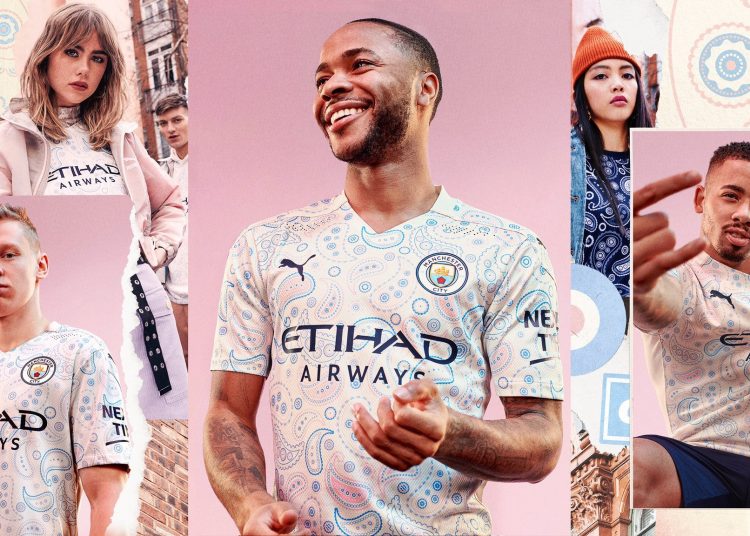 It has been days of rumours and shockers as Manchester City emerge as a potential destination for Barcelona legend, Lionel Messi, after the player expressed his desire to leave.

Whisper-White is a very light beige colour tone that will most likely appear white from afar, while Peacoat is Puma’s standard navy colour tone.

A bold and eye-catching paisley pattern appears all over the front and sleeves of the Man City 2020-2021 third shirt, inspired by the city of Manchester’s rich musical heritage and fashion culture.

The Argentine is reported to be wanting a move away from Barcelona and has handed in a transfer request.

One of the many clubs tipped to be a likely place for Messi is Manchester City who is led by Pep Guardiola – his former coach.

The Spanish coach left his post at Barcelona in 2012 in an emotional press conference attended by a lot of the first team players but Leo Messi exempted himself.

He later posted on social media: ‘I want to thank Pep for all that he has given me in my career and on a personal level. Because of how emotional I feel, I prefer not to be at the press conference. Above all, because I know they will look for the sad faces of the players and I do not want to show mine.’

Years on, the Argentine is reportedly interested in reuniting with ‘the love of his life’, a manager under whose management he developed greatly, winning UEFA Champions League trophies, La Liga, Copa del Rey, Club World Cups, Super Cups and Super Copa de España together.

Despite Guardiola’s comment in February that he wanted Messi to stay with the Catalan giants, a reunion now is well on the cards.

Manchester City themselves have come under scrutiny as they were cleared for breaching any transfers. But they would be allowed to sign Lionel Messi.