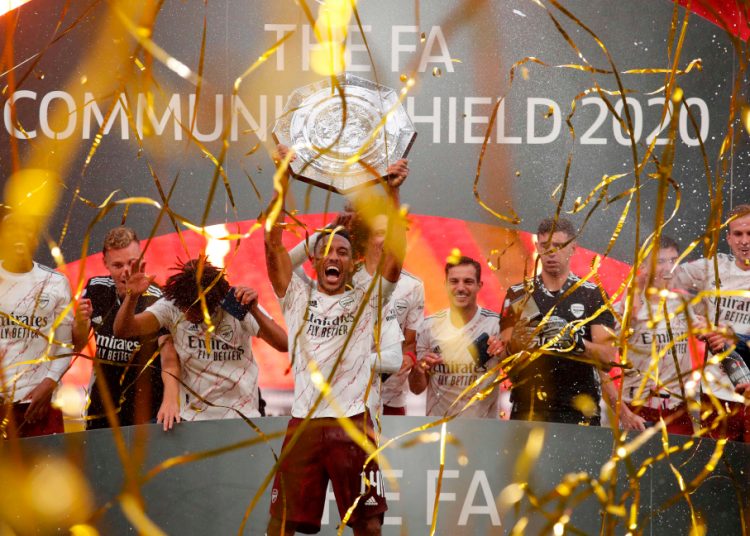 Mikel Arteta’s men have triumphed over Jurgen Klopp’s charges at the Wembley, beating the Premier League champions 5-4 on penalties.

Liverpool started the brighter and thought they’d taken the lead in the seventh minute.

But the offside flag was raised and the video assistant referee ratified the on-field decision following a review.

James Milner screamed in frustration after heading over a Neco Williams cross as the Reds continued brightly, with the irritation only increasing after being hurt by a moment of quality in the 12th minute.

Bukayo Saka switched the ball to Pierre-Emerick Aubameyang on the left, with the Arsenal talisman cutting in and curling a superb right-footed strike past Alisson Becker from the edge of the box for the opening goal.

The Liverpool goalkeeper had to be alert to prevent the Gunners doubling their lead six minutes later.

Eddie Nketiah dispossessed Joe Gomez and started a break that ended with the striker getting away a first-time shot from Saka’s cross that Alisson did well to push wide having got down low to his left.

The Arsenal attacker was unable to find the target next time he took aim in the 27th minute as play began to swing from end to end, with penalty appeals after Sadio Mane went down under pressure from Hector Bellerin falling on deaf ears.

Mikel Arteta’s side had to dig deep during the back end of the first half, with Liverpool peppering the box with crosses.

Some just evaded their intended target and others were cut out by the first man, with Robertson and Mane looking particularly dangerous on the left.

But Arsenal also provided a threat from out wide and Saka’s low ball threatened as half-time approached.

Martinez superbly blocked a Mane effort with his feet as Liverpool tried to break down Arsenal’s backline, with substitute Takumi Minamino seeing a hopeful attempt denied.

Minamino was rewarded for his efforts in the 73rd minute, however, with the January signing registering his first goal for Liverpool after a scramble in the box.

A VAR check followed amid suggestions of a handball by Salah during the build-up but the goal stood and the full time score was 1-1.

In the shootout, Salah, Reiss Nelson, Fabinho and Maitland-Niles all scored before Rhian Brewster hit the bar.

Brewster had been brought on by Klopp in the dying moments of the game, seemingly only for the purpose of taking a penalty.

Cedric, Minamino, David Luiz and Curtis Jones then all found the net, leaving it up to Aubameyang.

The result was never in doubt though, as the Gabonese star fired home with no hesitation to claim the silverware for Arsenal.