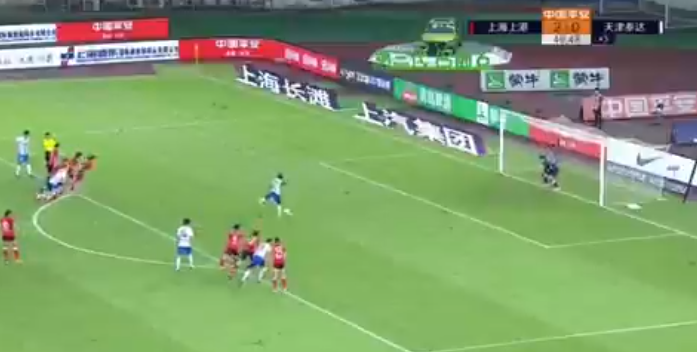 Black Stars’ Frank Acheampong failed to help his club side, Tianjin Teda to their first league win after missing from the spot in a ridiculous manner.

Acheampong miss was an attempt of Jorginho’s run, hop, shot, and score. However, his was more of a gallop, leap and miss – much to the disappointment of his manager.

Tianjin Teda were winless in Group B of the new league format heading into their game against Shanghai SIPG.

Acheampong, who is now the new team captain, stepped up to take the penalty after Shiyuan Yang handled the ball inside the penalty area.

Tianjin Teda then went on to lose the game 4-1

Acheampong played for the whole 90 minutes, having two shots on target, 33 touches, 19 accurate passes at 82%, and 100% accurate long balls (three from three).

The Ghana international who was appointed the club captain this season has played in six of the eight Super League games this term with his only contribution being an assist in the 2-1 defeat at Wuhan Zall the last time out.

Acheampong’s side have now gone five games without a win. The club has played eight games, lost seven, and drawn just one, conceding 21 goals in the process.