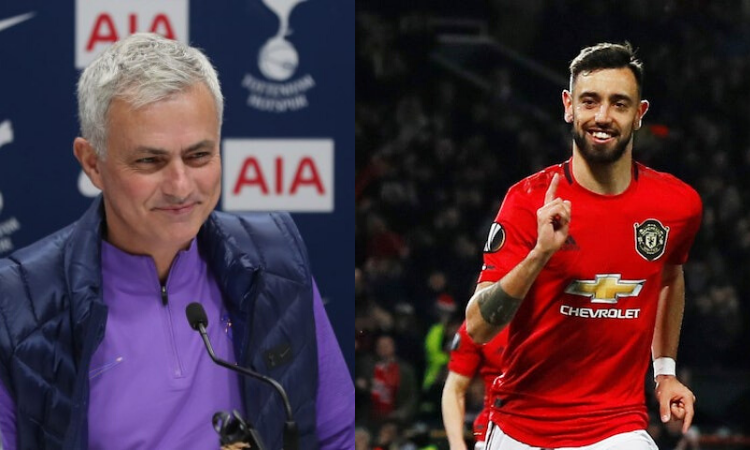 Manchester United player, Bruno Fernandes has responded to Jose Mourinho’s comment on the number of penalties he converted in the 2019/2020 season.

The Portuguese footballer proved to be a worthy buy for Manchester United as his move transformed and shaped the fate of the club for the rest of the season.

Fernandes was involved in 18 goal contributions for the club, scoring 12 and providing eight assists for Ole Gunnar Solskjær’s team.

Eight of the 12 goals came from penalties, where he converted all, having a 100% record, stretching from the last two years.

A month later after the end of the season, Spurs’ boss, Jose Mourinho aimed a dig at his compatriot who plays for a club he once coached, Manchester United.

He told Portuguese outlet Record per Sport Witness: “Bruno came in, was fit, played very well, improved the United team and also proved to be a great penalty taker, one of the best in the world because he had about 20 to score.”

Fernandes was asked about it in a recent interview but instead of firing back, he took it as a positive thing that Mourinho was praising his abilities from 12 yards.

Bruno Fernandes: “I hear people saying ‘ah, he only scores from penalty kicks’, but a little while ago, I saw the statistics and, except for penalties, only Kevin de Bruyne has a higher involvement in goals than me in England when it comes to midfielders.” #mulive [a bola]

“I honestly did not feel stung, I felt that I am a good penalty taker and nothing more,” he told A Bola.

“I understand, but what I take from his words because I’m a very positive person, is that he said I hit penalties well. It is a reality, not least since I arrived at Manchester United, I have not missed one. And I hope I don’t fail.

“I’ve only missed two penalties, one for Udinese against Napoli and then in the Portuguese Cup, with Loures.”

Manchester United will be hoping for more wins and Bruno Fernandes will also certainly be dreaming of scoring more goals for The Red Devils, even if it comes from 12-yards.