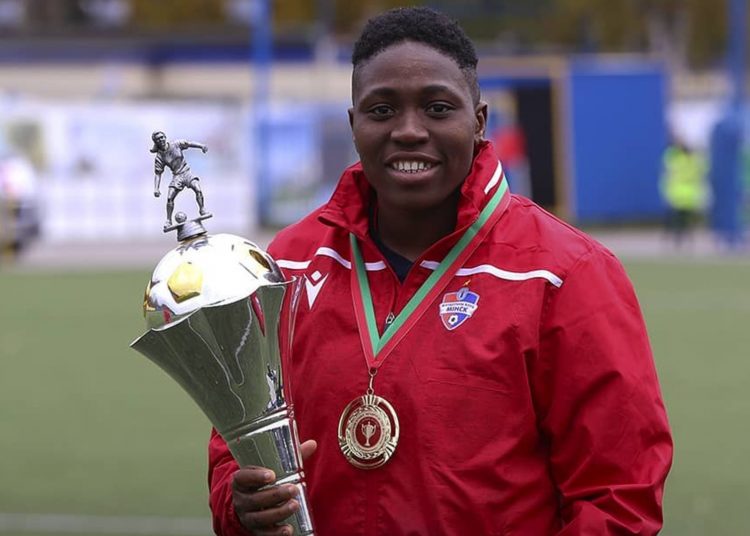 Nigeria striker Emuidzhi Oghiabekhva has become the first African to clinch the golden boot in a UEFA Women’s Champions League following her exploits for Minsk.

The 30-year-old netted 10 goals in seven Champions League outings for Minsk in the 2019/20 season to share the golden boot.

To achieve the feat, Oghiabekhva netted six goals in the qualifying rounds before adding four in the main tournament despite Minsk were eliminated in the Round of 16 by the Spanish side, Barcelona.

She will have to share the prize, however, with Arsenal’s Vivianne Miedema and Breidablik’s Berglind Bjorg Borvaldsdottir recording the same goalscoring feat during the just-concluded European competition, which was won by Lyon.

Her appearance in the 2019/20 Champions League marked her fourth outing with Minsk and eighth since 2009, having previously represented Rossiyanka twice, Energiya Voronezh, and BIIK Kazygurt once.

Her latest feat summed up her remarkable year 2019 as she netted 29 goals in 17 league outings for Minsk, totaling 44 goals in all competitions, including five in the Belarusian Women’s Cup.

She inspired Minsk to a domestic treble in 2019, including the Women’s FA Cup and Super Cup, and saw her being crowned the Belarusian Women’s League Best Player of the Year.

She has already continued from where she left off last campaign, scoring 17 goals in 11 outings in all competitions this season before an injury forced her to part ways with Minsk in August.