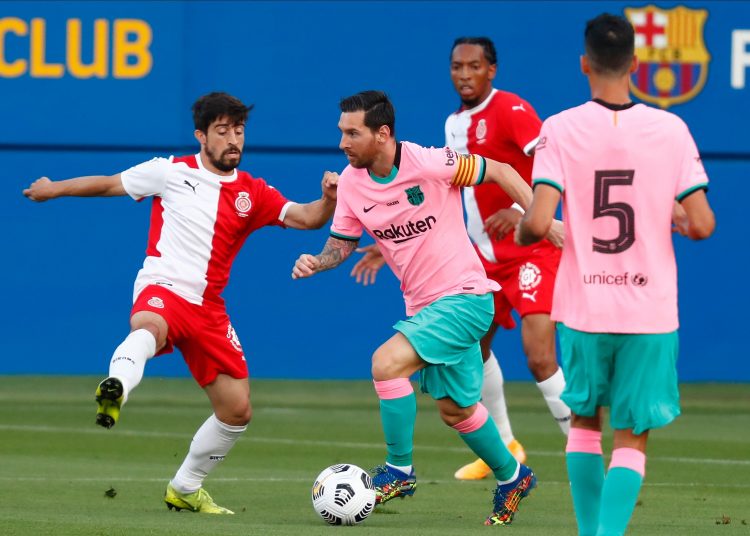 After a long transfer brouhaha concerning his future, Barcelona captain Lionel Messi made an immediate impact on his return to the club’s XI scoring a delightful goal with his weaker foot in a pre-season friendly against Girona.

The 33-year-old reminded fans of just how good he is as a footballer.

Messi first produced an exquisite pass to Francisco Trincao in the build-up to his sides’ first goal in their clash with Girona in the preseason.

The Argentine would later be rewarded in the first half with a mind-blowing curler with his weaker, right foot to double his side’s lead.

The Blaugrana forward received the ball outside the box, quickly turned, and then fired his shot past Neto with a superb finish.

His goal didn’t go unnoticed as fans took to Twitter to hail the 33-year-old for the sensational goal.

With his weak foot pic.twitter.com/FXGD6qB9fF

Hes the only player ever who still makes me cry with the things hes does so unpredictable what a talent when you think he can’t get better than he already is he does this 🐐🐐 pic.twitter.com/hJDe3mPy2H

The greatest sportsperson ever to live. @FCBarcelona pic.twitter.com/sQdCgpblFM

Koeman: Which one is your weak foot

A lot has been said about Lionel Messi’s “inability” to score goals with his weak foot (most of which is downright untrue). But man, I wish I could kick a ball that cleanly with my weak foot. https://t.co/LpuPsLDHUB

And still some nomadic people would say that Messi plays with only one leg. Messi is the greatest ever 🐐